It might have the look of an SUV, but four-wheel drive isn’t standard on all models in the Mercedes GLA range. All but the most expensive versions of the GLA are front-wheel drive, but unless you plan on driving it through deep snow frequently, or have the need to cross wet or muddy fields, you won’t really miss out.

The four-wheel-drive system is called 4MATIC and it's standard on the GLA 250. It can shift power between the front and rear wheels for extra grip, making the GLA a reasonably capable off-roader and a sure-footed drive on slippery roads. In normal conditions, 4MATIC models operate in front-wheel drive mode to save fuel, but when grip is lost, power can be sent to the rear wheels to maximise grip as needed. 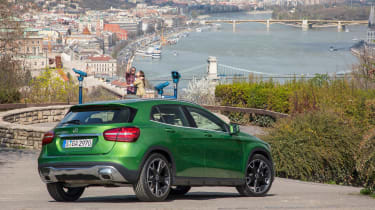 The GLA handles reasonably on country roads, staying relatively flat given the softness of its suspension, but the steering lacks feel and is slow to respond, resulting in a car that isn't hugely involving to drive. The suspension was upgraded as part of the 2017 facelift but poor road surfaces still provoke uncomfortable crashes and thumps, especially if you opt for the larger alloy wheels. The ride quality in a BMW X1 is better resolved, and its steering provides more feedback.

The GLA 250 is the sportiest model in the ‘normal’ range. It has a 208bhp 2.0-litre turbocharged petrol, which is the smoothest engine available in the GLA. With a 0-62mph time of 6.6 seconds, it’s fast enough for most people but never sounds or feels exciting enough to justify choosing it over the more economical engines. The entry-level GLA 180 does 0-62mph in nine seconds but on the road it feels somewhat underpowered. The GLA 200 petrol with an 8.4-second 0-62mph time is a better bet. It’s worth noting that the automatic gearbox reduces the respective 0-62mph times by 0.3 seconds.

The top-of-the-range Mercedes-AMG GLA 45, reviewed separately, will appeal to those looking for the best performance available. With 367bhp, it's very quick, and it's more fun to drive than the other models in the range thanks to its firmer suspension. However, this car is both expensive to buy and run.