The Mercedes GLA feels well-built, but despite the recent facelift, its dashboard design still lags behind key rivals, most notably the Audi Q3.

As you’d expect from a Mercedes, plenty of high-quality materials are used inside the car. The interior is quiet and refined, with minimal wind and road noise, even on the motorway.

You’ll have to dig a little deeper to find low-rent plastics, but there are some. And if we’re being picky, the rotary dial that controls the audio and sat-nav systems is starting to look dated, while the infotainment screen looks like an add-on item. The facelift has added some extra chrome, refined the dashboard dials and improved some of the plastics, but it's failed to address the button-heavy centre console. 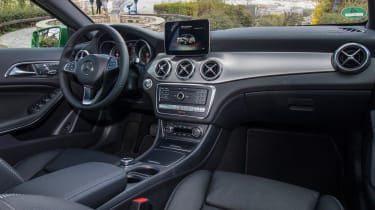 But elsewhere, the GLA’s dashboard is much the same as you’ll find in the now-replaced A-Class and CLA; namely elegant chromed air-vents, easy to read instrumentation and a dashboard-mounted colour screen that allows you to operate most of the car’s secondary controls. Plus, if you choose an automatic model, the gearstick is mounted where you’d usually find the windscreen wiper stalk – like pretty much every other Merc.

The GLA cost around £3,000 more than the previous Mercedes A-Class on which it's based but you get a much more practical and comfortable car. The GLA has also received a mid-life update, and, while the changes are subtle, it has helped keep it fresh against rivals. 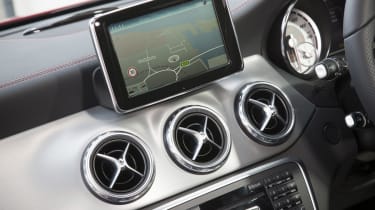 There used to be a long and exhaustive options list fpr the GLA, giving you more choice than you could ever wish for, but Mercedes has really slimmed it down. Metallic paint (£595) and DAB radio (£420) are the only extras now available, but the latter really shouldn’t be an option on a car of this class, especially considering it now comes fitted in most city cars without paying extra.