The Nissan Qashqai Acenta is a highly recommended alternative to mainstream small family hatchbacks. The Acenta trim is relatively expensive, though. 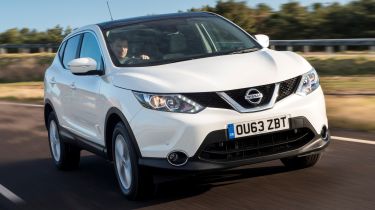 Going head-to-head with cars like the Volkswagen Golf and more traditional off roaders like the Kia Sportage and Hyundai ix35, the Nissan Qashqai’s beauty has been offering rugged looks and an elevated driving position but without the running costs associated with an SUV.

We think the Nissan Qashqai is the best small SUV or crossover money can buy. Put simply it’s an incredible all-rounder that offers buyers near unbeatable running costs from all of its engines, while pound-for-pound the Nissan has more standard equipment than its rivals.It also has a great interior and a spacious boot and cabin. If that’s not enough the Qashqai has a decent ride and is also good to drive.

Rear visibility is poor with the Qashqai and care is needed when parking – making the rear reversing camera a worthwhile option to tick on the extras list.We also think the rear seat is on the cramped side for passengers and the range-topping models are really rather expensive. However the good news is when you come to sell your Nissan Qashqai it will hold onto its value more than most of its rivals thanks to its popularity and tremendous mix of talents.

Our favourite crossover model in the business works well with the smallest 1.5-litre dCi diesel engine that is not only smooth, but helps the Nissan Qashqai return up to 74.3mpg.