"The Peugeot 2008 Allure is our pick of the crossover's trim levels." 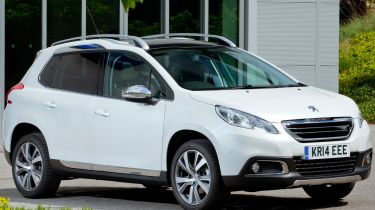 The Peugeot 2008 Allure is a crossover SUV that is placed towards the higher end of the trim spectrum. Allure trim is regularly considered to be one of the more luxurious Peugeot trims, with the 2008 Allure featuring climate control, automatic headlights and wipers, electric folding door mirrors and stylish alloy wheels. The trim also features some choice chrome inserts, found on the door mirrors and on the door sills. In fact, if you really want a 2008, the Allure is our pick of the bunch.

You can choose from a range of petrol engines and a 1.6-litre diesel engine that has different power variants. Although the petrol engines are cheaper to buy, they are a lot slower than their diesel counterparts. The diesels are more fuel efficient too.

The 2008 isn't a big car - it's around the same size as a Nissan Juke - but it manages to be spacious both for passengers and your luggage.

Inside, the 2008 is quite well built. The materials used are robust and the overall design is sharp. Like the 208 and 308 hatchback, the 2008 has a central touchscreen, which controls most of the car's functions.

Unlike the Juke, and other compact SUVs like the Skoda Yeti and Vauxhall Mokka, the 2008 can't be equipped with four-wheel-drive. Instead, Peugeot has fitted the Allure trim with Grip Control, which helps to curtail wheelspin in wet or muddy conditions. Other than that, the 2008 is definitely front-wheel-drive only, with a focus more on predictable handling and comfortable suspension.

Like the Peugeot 208 and 308 hatchbacks, the 2008's engines are very economical. For example, the 100bhp 1.6-litre BlueHDi diesel engine with start/stop can return up to 78.5mpg. That's more than the 1.5-litre diesel engine offered in the Nissan Juke.Despite being a compact SUV, there's still loads of space inside. Passengers have good head and legroom, and there's a generous boot for your luggage too.The 2008's soft ride means it's easy to drive long distances in comfort. The forgiving suspension irons out most bumps easily.

The Allure spec may be well equipped, but the omission of basic security measures like an alarm seems miserly. Some car makers will make an alarm optional on the most basic versions of their cars, but for a high-end trim like the 2008 Allure, it seems like a misstep from Peugeot.The petrol engines are pretty slow. Admittedly, they are tuned for economy rather than performance, but the 82bhp 1.2-litre takes a particularly leisurely 15.3 seconds to reach 62mph.Although the 2008 is comfortable, it's not the last word in fun. The steering is a little overly twitchy on motorways and body roll is slightly more pronounced than is to be expected for a car of this size.

The 100bhp 1.6-litre BlueHDi diesel engine provides the best case here. It's punchy in low revs and provides an impressive fuel economy figure of 78.5mpg. You pay no road tax, too.