"The Peugeot 2008 crossover is a practical small family car, with an innovative interior design and low running costs"

SUVs come in many shapes and sizes. Among the more compact is the Peugeot 2008. We say ‘compact’, but in fact, it’s surprisingly roomy and although it’s essentially a practical car, its interior feels quite special. It’s particularly suitable for couples or young families who’ll appreciate its low running costs, a result of its efficient petrol and diesel engines.

It has many excellent rivals, of course, including the Vauxhall Mokka X, Renault Captur, Nissan Juke, Mazda CX-3, Citroen C3 Aircross and Ford EcoSport. The SUV market is a crowded one, but the Peugeot 2008 certainly deserves a close look. 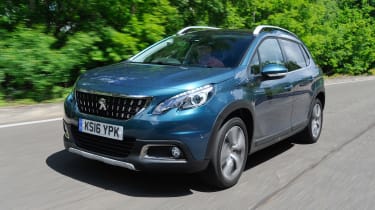 That look may well begin with the engine line-up, which is quite complicated. While there are only two basic engines – a 1.2-litre petrol and a 1.5-litre diesel – there are no fewer than five power outputs. There’s a choice of manual and automatic transmission, too.

The petrol engines are ideal for most journeys and around £1,500 cheaper than their diesel equivalents. Unusually, the top engine, which produces 128bhp, is the best in terms of economy and performance. It can return up to 49.9mpg, which is actually more than the less-powerful 80bhp engine manages, thanks in part to its six-speed gearbox. It’s no slowcoach, either – it can get the car from 0-62mph in 9.9 seconds.

Being a tall SUV, the 2008 doesn't handle quite as well or feel as composed as its hatchback sibling, the 208. It leans a little in corners, but always feels secure. That sense is heightened in those models fitted with optional Grip Control, a clever system that controls the brakes and throttle, boosting traction on slippery surfaces and giving the front-wheel-drive 2008 a degree of four-wheel-drive capability.

There are four trim levels – Active, Allure, Allure Premium and top-spec GT Line. Good news is that the entry-level Active is as well equipped as most will need, with alloy wheels, air-conditioning, cruise control, a seven-inch touchscreen with Apple CarPlay and a DAB digital radio. Only Grip Control is missing but it’s really only something you might need for driving across a muddy campsite.

The 2008 finished 33rd out of 100 cars in our 2019 Driver Power owner satisfaction survey. It was awarded the full five stars in independent crash testing by experts Euro NCAP, too, so should be a safe way to transport your family.