For some buyers, the mid-range 1.5-litre BlueHDi 100 diesel will make more sense. It'll do 67mpg on the WLTP cycle and emits just 94g/km of CO2. We have previously recommended the 118bhp version of the same engine, although it's now only available with an automatic gearbox. It returns 58.2mpg, but is easily the quickest diesel. In fact, it’s only fractionally slower than the most powerful petrol.

It's worth noting that, as with an increasing number of modern diesels, the 2008’s BlueHDi engines will need topping up with AdBlue, a fluid that helps to remove harmful pollutants from the model’s exhaust gases. While this should be taken care of during your annual service, high-mileage drivers may need to replenish their car’s AdBlue between services. 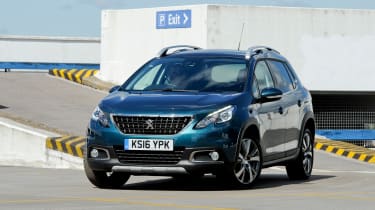 Peugeot offers the 2008 with a three-year/unlimited-mileage warranty. That’s on par with the warranty you get on the Nissan Juke and trumps the industry-standard three-year/60,000-mile package you get with a Ford EcoSport, Citroen C4 Cactus or Vauxhall Mokka. The Renault Captur has a four-year 100,000-mile warranty that’s more attractive, though.