While some versions of the Peugeot 2008 are sluggish, the 1.6-litre diesel offers good all-round performance

Despite its off-road pretensions, the Peugeot 2008 is front-wheel-drive only, but versions fitted with a system called Grip Control offer some off-road capability by limiting wheelspin in slippery conditions.

Like the Peugeot 208 and Peugeot 308, the 2008 has a small steering wheel, which Peugeot has fitted to make its cars feel more fun to drive. But it’s only a partial success, because while the wheel does make the 2008 feel agile on twisty roads, it can also make the steering twitchy on long motorway drives. In corners, the Peugeot doesn’t lean too much and has enough grip, but rivals such as the Skoda Yeti and Nissan Juke both feel sportier to drive. 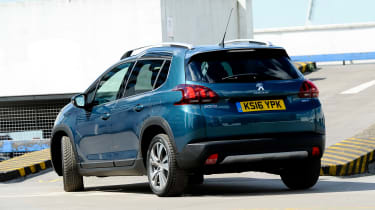 There's just one 1.2-litre petrol engine, albeit with a choice of three different power outputs (80, 108 and 129bhp). The 129bhp 1.2-litre engine is the fastest-accelerating model in the range, with a 0-62mph time of 9.3 seconds. The 80bhp version takes 13.5 seconds to reach 62mph from rest, so it's not very sprightly, but it isn't a bad option for town driving.

There's one 1.5-litre diesel engine with a choice of two different power outputs (98 and 118bhp). The 98bhp version has plenty of power for driving in the countryside and on the motorway and will do 0-62mph in 11.3 seconds, but it’s worth stepping up to the 118bhp engine if you can – not only for the extra performance (0-62mph in 9.6 seconds), but also because it’s fitted with a six-speed gearbox. That makes motorway cruising more relaxed, while this gearbox is also much smoother to use than the rather clunky five-speed.