There's lots of space inside the Peugeot 2008, which, added to the practical boot, makes it an ideal car for families

The Peugeot 2008’s high driving position gives you a sense of being slightly above the level of normal cars, but it’s largely an illusion because the 2008 is actually quite small. At 4,159mm long and 1,739mm wide, it’s similar in length and width to the Citroen C4 Cactus at 4,157mm and 1,729mm, but there’s still a reasonable amount of room inside and the boot capacity isn’t bad, either. 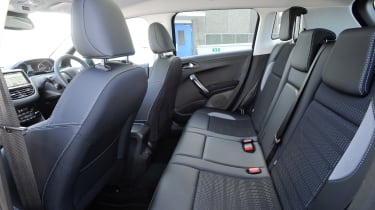 By making the 2008 taller and longer than the Peugeot 208 supermini, there’s now plenty of head and legroom for rear-seat passengers. Just beware the panoramic sunroof (standard on top-spec Allure Premium and GT Line models and an optional extra elsewhere in the range) if you’re tall, as it cuts down on headroom.

While interior space impresses, cabin storage is disappointing, because the glovebox is only half the size it first appears – this is due in part to the bulky fuse box. The front cup-holders are also a bit fiddly, as they’re in front of the gearlever and too small for larger coffee cups. Instead, you’ll need to rely on the door bins, which isn't ideal because there’s nothing there to hold your cup in place.

There’s 410 litres of space behind the rear seats, which rises to 1,400 litres with the back seats folded flat. It’s worth mentioning that a lot of traditional family hatchbacks such as the Honda Civic have larger boots (477 litres), so you shouldn’t be fooled by the Peugeot’s tall body. 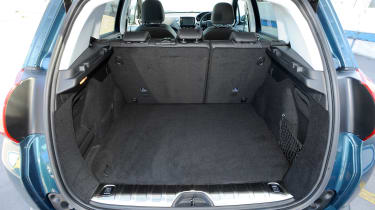 However, the 2008’s boot size is roughly on par with its rivals (such as the Nissan Juke, with 354 litres), but a lot less than the class-leading Renault Captur’s 455-litre boot.

The boot opening is lower than a traditional SUV’s and there’s a smooth metal loading lip and aluminium rails inside the boot to help slide heavy items inside. Folding the 60:40 split rear seats down reveals a flat boot floor with a clever flap to stop luggage snagging between the seats and boot floor.

The Peugeot 2008’s towing abilities vary enormously depending on which engine you go for. The 1.2-litre PureTech 82 petrol engine is only capable of towing 770kg when fitted with an automatic gearbox, while the 1.6-litre BlueHDi 120 diesel model can handle a more respectable 1,300kg.