The Renault Captur is a relatively inexpensive car to run and it's also pretty cheap to buy, kicking off at a little bit less than a basic family car like a Volkswagen Golf or Ford Focus. It's quite keenly priced compared to its rivals, too, coming in at about the same as the Peugeot 2008 and Nissan Juke, but less than the Vauxhall Mokka X. Prices for the Citroen C4 Cactus start lower, but the Dacia Duster is the cheapest of them all – yet it doesn't come with the same amount of standard equipment. You might want to avoid the top trim level, however, as the Captur looks the best value lower in the range and can get pricey.

The 1.5-litre dCi 90 diesel Captur is the most economical model, achieving up to 53.3mpg in mixed driving and CO2 emissions of 112g/km, giving it a lower Benefit-in-Kind (BiK) rating for company-car drivers, depending on trim level. Renault has given all Capturs an 'Eco' button on the dashboard, which limits engine power and increases fuel economy by up to 10%. 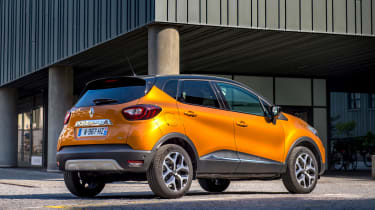 The entry-level petrol is a turbocharged 0.9-litre TCe that returns 45.6mpg and produces CO2 emissions of 122g/km for a low BiK band. Above that, there's a 1.3-litre turbocharged engine with either 128 or 148bhp, which manage 44.1 and 43.4mpg respectively. Both fall into low BiK bands too, although the 148bhp engine is only available with an automatic gearbox.

After the first year's CO2-based road tax (generally included in the on-the-road price), all Renault Capturs cost £145 a year to tax. If you want the most efficient car in this class, then there are better options, including the Citroen C4 Cactus BlueHDi diesel.

Insuring the Captur should be affordable, with groups ranging from eight for the entry-level petrol to 15 (out of a total of 50) for the top-spec diesel.

The Captur comes with a three-year/60,000 mile warranty, which is about average for the industry. The warranty does include three years' roadside assistance. The Kia Niro offers the longest warranty in the class, lasting seven years or 100,000 miles.

For £99 you can buy the EasyLife Servicing Pack, including three services and complimentary vehicle health checks.