Basing the Renault Captur on the Renault Clio was always going to restrict the car’s practicality, but it still offers useful dimensions. It’s 60mm longer than the Renault Clio, so there’s more rear legroom, while the rear seats can slide backwards and forwards to free up even more space either inside the cabin or in the boot.

The Captur’s short bonnet and vertical tail mean you’ll find parking is pretty easy, too. It helps if you add the parking sensors or reversing camera, though. 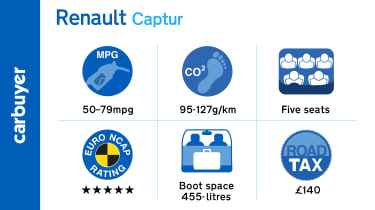 There’s plenty of room in the front seats and Renault has given the car useful storage areas, including deep door pockets and a handy cubby in the car’s centre console. Sadly, converting the Captur from right to left-hand drive means UK models don’t get the same 11-litre glovebox capacity as cars sold on the Continent, which would’ve been handy. 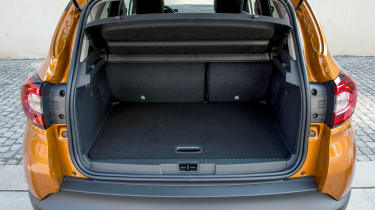 There are no worries when it comes to boot space – with the rear seats pushed all the way back, there’s a reasonable 377 litres on offer. That increases to 455 litres when you push them forward – which is bigger than what you get in many cars in the class above, including the Ford Focus and Volkswagen Golf.

The folding rear seats split 60:40 and Dynamique cars also get washable seat covers. If you do have the seats all the way forwards, it’s probably best not to carry passengers in the back, as legroom gets a bit tight with the seats slid forwards.

Remember, though, there’s no spare wheel as standard – you have to specify one as an optional extra and if you do, it lives underneath your boot floor. That limits the amount of boot space, because you no longer have the ability to lower the boot floor to carry extra luggage.

No matter which model you go for, the Captur has a maximum towing capacity for a braked trailer of 1,200kg. For an unbraked trailer, the maximum capacity varies between 590 and 635kg depending on the version. This is quite low for a crossover, with even the Citroen C4 Cactus able to tow 825kg and some versions of the Jeep Renegade able to haul up to 1,500kg.