With six airbags, the Renault Captur is a safe car, but owners report poor reliability

The Renault Captur is growing in popularity, with buyers drawn by its impressive safety credentials and customer satisfaction. We know the Captur is safe thanks to its five-star Euro NCAP crash-test rating, but owners have told us issues can be common.

The Renault Captur didn’t finish in our 2019 Driver Power owner satisfaction survey of cars currently on sale in the UK. In 2018, though, the Captur finished 70th overall out of 75 models with 22.8% of owners reporting a problem with their cars at least once in the first 12 months of ownership, with gearbox issues causing the most trouble.

However, Renault appears to be improving customer satisfaction overall, because the French manufacturer scored a respectable 19th out of 30 manufacturers in our 2019 survey. Rival mainstream brands such as Ford, Vauxhall and Hyundai all finishing below. 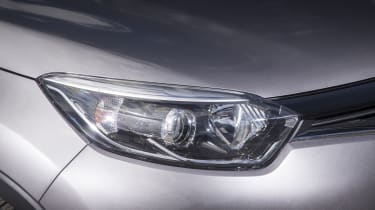 Getting a five-star crash safety rating from Euro NCAP is a good sign, especially since the test was made much tougher in 2015. So to go into more detail, the Captur scored very well for adult (88%) and child occupant (79%) protection. That’s down to a body that’s designed crumple in a controlled way during a collision, as well as six standard airbags.

Pedestrian protection was less impressive, rated at 61%, but this is an area that carmakers have only begun to focus on quite recently, so top-notch scores aren’t par for the course yet.

To help keep children safe, Renault has put ISOFIX child-seat points to the passenger seat and the outside back seats – this makes fitting child seats easy and safe. Blind-spot monitoring and front parking sensors are available, as is autonomous parking to help avoid bumps.