The Renault Grand Scenic is a good antidote to the stresses of family life, with its easy steering and generally comfortable ride. There isn’t a wide choice of engines, but since the Grand Scenic is more about comfort than excitement, the better petrols and diesels are fine even when you’re travelling seven-up.

The petrol range starts with the basic 1.6-litre 110 petrol with 109bhp, which at least means the Grand Scenic can be offered for less than £21,000. 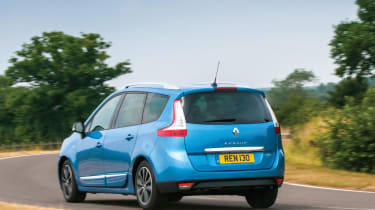 However, the turbocharged 1.2-litre petrol engine – which produces either 113 or 138bhp – is much better, as well as cheaper to run. Being a petrol engine, it’s also smoother and quieter than a diesel at low speeds, so it’s a decent choice for those who spend a lot of their time on local errands round town.

The 109bhp 1.5-litre diesel is cheap to run and quick enough, although it feels underpowered when the car is fully loaded with people and kit. The more powerful 1.6-litre diesel is a better choice if you frequently travel fully laden or plan to do a lot of miles on the motorway, where it offers a more relaxed driving experience thanks to having more power on tap.

While the Grand Scenic’s suspension is a little firm over poor surfaces, such as urban roads, it effectively smooths out larger lumps and bumps for a generally calm and comfortable ride. The car does lean a bit around corners, but overall it feels stable and secure and the cabin is fairly quiet, too with wind and road noise well suppressed. Light, if slightly vague, steering makes it easy steer around town and park in tight spaces.