“The Renault Grand Scenic is a great-value people carrier and it’s good to drive, but it’s not as practical as most rivals.”

The Renault Grand Scenic people carrier is just 22cm longer than the standard five-seat Renault Scenic, but this is still enough to fit in two extra seats that pop up from the boot floor. Both cars are in the Scenic model’s third generation, which was launched in 2009 and dramatically improved its design over the dowdy previous version. It had facelifts in both 2012 and 2013; in the latter, the front end and dashboard were updated and Renault added more efficient engines to the range.

As with most seven-seaters, the Grand Scenic provides three separate second-row seats that each recline and slide to allow you to adjust the relative amounts of boot space and legroom. The boot is huge with the third-row seats folded and there are plenty of clever storage areas all over the cabin. The third-row seats are pretty cramped, though, so if you need to carry seven adults, look at a Ford Galaxy or SEAT Alhambra instead. 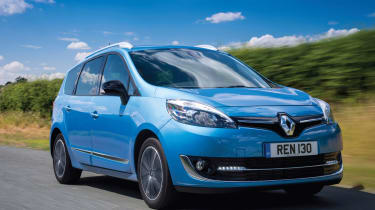 The Grand Scenic’s practicality lags behind similarly sized rivals such as the Citroen Grand C4 Picasso and Ford S-SMAX in other areas, so its main appeal is its value for money. Choose the 1.5-litre diesel engine for the lowest running costs, as it returns nearly 70mpg and is quick enough for everyday motoring. The 1.6-litre is significantly faster and still returns 64.3mpg, but it’s quite a bit pricier to buy.

Dynamique TomTom is the cheaper of the two trim levels, but has everything you’d want, including sat nav, Bluetooth phone connectivity, rear parking sensors, cruise control and automatic lights. For an extra £500, Limited adds a panoramic roof, roof bars and rear parking sensors as standard, but you get fewer options to choose from with this version.

The Grand Scenic has much to crow about when it comes to safety, including a full five-star rating from Euro NCAP, incorporating a 99% score for active safety features.