The Renault Grand Scenic is fairly modestly sized for a seven-seat people carrier – much like the Peugeot 5008 and Citroen Grand C4 Picasso. They’re all quite a bit shorter and narrower than the Ford S-MAX, although not as compact as the seven-seat versions of the Toyota Verso or Ford C-MAX. Nonetheless, the Grand Scenic isn’t as practical as its rivals as its second-row seats don’t fold flat, but it does offer a huge boot when the third-row seats aren’t being used.

The Grand Scenic’s tall roof means there’s plenty of headroom for everyone on board, and decent legroom for those in the first two rows. The second-row seats fold and recline individually and you can slide them backwards and forwards to give either more legroom or boot space as required. Large side windows with a low sill give children a good view out.

The third-row seats are only really suitable for children, although they’re easy enough for adults to access for short journeys if you completely tumble the outer second-row seats. 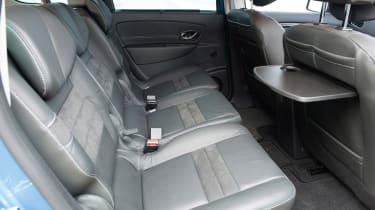 The central second-row seat is also best suited to children, as the seatbelt buckles each side of it leave quite a narrow base for an adult to sit on without the buckles digging into them. This limited width also means that a smaller selection of child seats will fit in this location, which rather defeats the purpose of its ISOFIX mounting points.

The cabin is generously supplied with clever storage areas, including secret compartments under the rear footwells and little pockets on the back of the front seats.

The Renault Scenic isn’t as versatile as most other people carriers of its size, however, because the second-row seats don’t fold flat into the floor; you have to remove them entirely if you want the maximum load capacity, and they’re heavy and awkward to lift out. 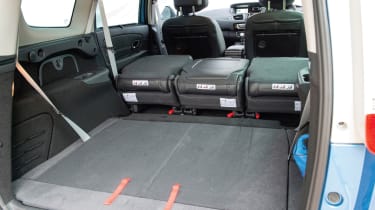 The Grand Scenic has a huge boot with the two third-row seats folded down, although it’s annoying that the seatbelts for these aren’t kept more neatly out of the way. There’s still enough space for a slim-folding buggy or a few bags of supermarket shopping when the third-row seats are in use, although they do leave a slim gap in the boot floor where small items can easily get lost. A huge square hatch makes access to the boot easy. A space-saver spare wheel can be added as an option for £95, otherwise an emergency tyre-inflation kit comes as standard.

The 1.6-litre dCi 130 diesel engine is the best choice for towing duties, as it offers a decent amount of pulling power at low revs. However, the Grand Scenic itself isn’t particularly heavy, tipping the scales at 1,563kg with this engine fitted, so caravanners will find their choice of models rather limited, especially if they stick to the common safety rule of towing no more than 100% of their car’s weight.