The Renault Grand Scenic is cheaper to buy than a number of its rivals, especially given its efficiency and the amount of equipment you get. The Citroen Grand C4 Picasso can return even better mpg, but costs more with sat nav; the Vauxhall Zafira Tourer costs the same but is less efficient; while a Kia Carens with sat nav returns just 44mpg. Renault’s four-year warranty beats most manufacturers’, while generous dealer discounts make up for the car’s weak residual values somewhat.

The Grand Scenic is almost as efficient as the five-seat model. The 1.5-litre dCi 110 diesel engine can return 68.9mpg, and at 105g/km its CO2 emissions translate to just £20 annual road tax.

The cost of tax goes up by £10 for the more powerful 1.6-litre dCi 130 diesel, which can still manage 64.2mpg. It costs £1,000 more than the 1.5-litre but it will make life much easier if you regularly travel with six other adults on board or spend a lot of time on the motorway.

Although they can't match the diesels, the turbocharged Grand Scenic petrol engines are still reasonably efficient. The less powerful 115 1.2-litre can return 46.3mpg and emits 135g/km of CO2, so road tax is reasonable £130 per year. 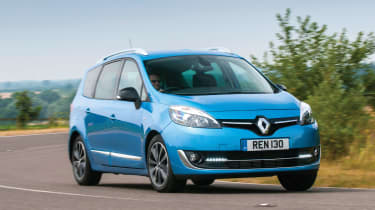 The automatic gearbox available with the 1.5-litre diesel engine saps nine mpg from the car’s fuel economy and puts up road tax from £20 to £110.

All Grand Scenics meet the minimum Euro V emissions standards. Renault says the diesels’ soot filter can clean itself at speeds as low as 8-13mph, which makes the Grand Scenic more feasible for urban drivers than rivals.

Most Grand Scenic models inhabit insurance group 19. The 1.6-litre 130 dCi will be the most expensive to insure, as it’s currently in group 24.

All Renault cars come with a competitive four-year warranty that includes unlimited mileage in the first two years; after this a cumulative total of 100,000 miles applies to the overall cover.

Renault offers a reasonable £159 fixed price for basic servicing. Its service plans aren’t so impressive, however, shaving just a few pounds of the price over two or three services.