The SEAT Ibiza is a very satisfying car to drive – particularly with one of the more powerful engines under the bonnet – but it's still slightly less fun to drive than the class-leading Ford Fiesta.

If performance is a priority, choose the 1.4-litre TSI petrol. It gives you a 0-62mph time of around eight seconds – enough to embarrass some genuine sports cars – but the smaller 1.2-litre TSI or 1.0-litre EcoTSI probably have adequate power for most motorists' needs.

The 1.4-litre TDI in FR trim provides a good balance of power and economy, dispatching with 0-62mph in 9.9 seconds but also managing 72.4mpg and costing nothing to tax if registered before April 2017. The same engine in SE spec is slower but even more economical: 78.5mpg and also zero tax under the current system. 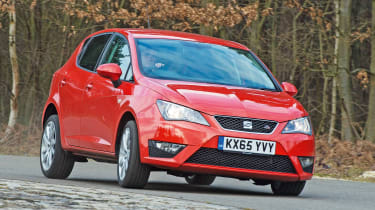 The standard five-speed manual gearbox feels solid and smooth, but there's also the option of a DSG automatic gearbox. It allows you to shift gears using steering wheel-mounted paddles, or just let the box change gears automatically for you. This set-up won't be to every driver's taste, but do give it a try if you can afford it – more and more cars will be adopting similar systems in the coming years.

Ride and handling are both strong points for the Ibiza. It manages something not many cars get right – a good balance between reasonably comfortable suspension over potholes and speed bumps and sure-footed handling on twisty country lanes.

Beware the range-topping FR model, though. It's been set up with keen drivers in mind, so while the handling is very impressive, the ride is a bit harsher than on lower-spec Ibizas. It's fun to drive on short trips, but will you be able to live with it in the long term?