"The SEAT Ibiza is one of our favourite superminis, with a sharp design, impressive engines and fun handling."

The SEAT Ibiza supermini has always looked great since its launch, but a major refresh in 2015 improved its in-car technology and engines, boosting performance and running costs.

This update has played a big role in keeping the Ibiza competitive – important when its rivals are as talented as the Ford Fiesta, Vauxhall Corsa, Renault Clio and Peugeot 208, not to mention the Volkswagen Polo and Skoda Fabia, which share many parts with the Ibiza.

Compared with its stablemates from VW and Skoda, the SEAT is the most youthful in appearance, particularly if you go for the three-door SC (Sport Coupe), which has a more coupe-like roofline, which looks great but also robs the Ibiza of some practicality. In contrast, the Ibiza ST (Sports Tourer) is a roomy estate, which we’ve reviewed separately. 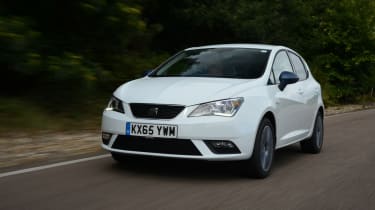 The Ibiza won the award for Best Sat Nav in a car under £25,000 at our 2016 Car Tech Awards, with praise for its sharp graphics and user-friendly operation, along with its integration of Bluetooth voice control.

Safety is another strong selling point, with the independent Euro NCAP crash-testing body awarding the Ibiza five stars. The Ibiza hasn’t appeared in our Driver Power customer satisfaction survey, but the SEAT brand came in 18th place out of 32 manufacturers, ahead of Volkswagen in 24th, but lagging far behind Skoda in third position. SEAT owners praised performance and handling along with low running costs, but criticised ride comfort and build quality.

For many, the fact the Ibiza has the engineering of the VW Group behind it, but with a more exciting design and fun driving experience than the Polo or Fabia, make it a good choice. 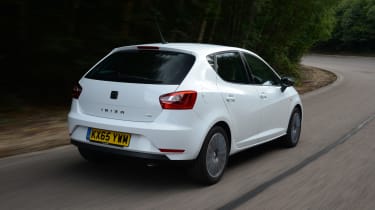 For a small supermini, there are a lot of engines available, from a 1.0-litre three-cylinder petrol shared with the SEAT Mii city car with 74bhp, or with a turbocharger boosting power to 93 or 109bhp and making it more efficient in the process. Somewhat confusingly, there’s also a 1.2-litre petrol with 89 or 109bhp, while a 1.4-litre offers an impressive 148bhp. There’s a 1.8-litre petrol with 189bhp in the flagship Cupra hot hatchback too, boasting almost-identical performance to the VW Polo GTI.

It seems a missed opportunity that the great-value Connect trim is only available with the 1.2-litre 89bhp petrol, but it’s still a compelling package. More engine choices are offered in the SE trim, which doesn’t offer quite as much kit as Connect, but includes air-conditioning, Bluetooth, DAB radio, USB input and LED exterior lighting.