Thanks to a wide range of engines, there really is a SEAT Ibiza for all budgets. The entry-level engines feel slow, but fuel economy is good and insurance will be cheap. Step up to the more powerful turbocharged engines, and while they're no costlier to fuel or tax, they will be more expensive to insure. In common with other VW Group brands, servicing is pricey, but the SEAT Ibiza should hold its value better than rivals such as the Kia Rio or Hyundai i20.

Resale values for the Ibiza are still not as strong as they are for a Volkswagen Polo, though, but as more buyers come to recognise the stylish yet sensible SEAT's appeal, residuals have been climbing. This means you won't suffer too badly from depreciation when the time comes to sell or trade in.

The cost of running a SEAT Ibiza varies quite a bit depending on what engine you choose from the large range on offer. The most economical and efficient version is the eco-friendly 1.4-litre Ecomotive diesel, which has been tuned for maximum economy. Special low-resistance tyres and aerodynamic improvements help it to return a claimed 78.5mpg and emit only 93g/km of CO2, so it’s exempt from road tax if registered before April 2017. 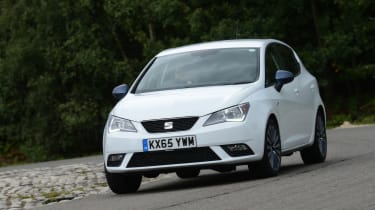 However, you may be better off going for the cheaper standard 1.4-litre TDI diesel, because although this Ibiza isn't tax-free, it still sits in the second-lowest road tax band, so your annual bill will be negligible if it's registered before the end of March 2017. It'll return more than 70mpg and feels just as fast as the Ecomotive.

Although this is a very impressive line-up of diesels, you shouldn't necessarily discount the petrols, particularly if you don't do a lot of miles per year. The 1.2-litre TSI and 1.4-litre TSI turbocharged engines are a good choice, as they're powerful, refined and offer impressive fuel economy (57.6mpg for the 1.2-litre and 58.9mpg for the 1.4-litre). Elsewhere in the range, a basic but frugal 1.0-litre, three-cylinder engine does 54.3mpg, or 67.3 with 94bhp and a turbocharger.

Choosing the DSG twin-clutch gearbox with these engines has a small negative impact on that fuel economy, but it shouldn't be a major concern.

Smaller-engined Ibizas tend to fall into middling insurance groups, ranging from eight for the basic 1.2-litre, up to nine for the 1.4-litre car. However, choosing one of the more powerful models means you'll pay more per annum for your policy.

The Ibiza's three-year/60,000-mile manufacturer warranty can now be extended to a maximum of five years or 90,000 miles at extra cost – although this still falls short of the unlimited-mileage five-year cover you get as standard with a new Hyundai i20, or the seven-year/100,000-mile cover offered by Kia on the Rio.

The Ibiza's service schedule is straightforward: a dealer visit is due every 10,000 miles or annually – whichever comes sooner.