“The SEAT Ibiza Cupra is quick and desirable thanks to sharp looks and a 1.8-litre petrol engine”

The SEAT Ibiza Cupra is the hottest version of the popular supermini, sharing a lot in common with the Volkswagen Polo GTI. Along with a host of other changes, the Cupra was transformed during a makeover in 2015, when its engine was increased in size to 1.8 litres. This made it much more fun to drive, while other updates to the interior and equipment helped keep the Cupra in contention with the Ford Fiesta ST, Renaultsport Clio and Vauxhall Corsa VXR.

Although its underpinnings are shared with the Polo GTI, the Ibiza Cupra is arguably better looking. Its sharp lines and youthful appearance are certainly in contrast to the conservative Polo, which looks every inch the mini-Golf. 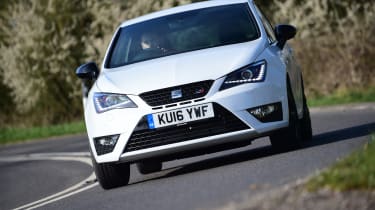 Despite looking so different, both cars boast the same punchy turbocharged engine. This feels significantly more potent than the 1.4-litre engine it replaced, a sensation accentuated by the six-speed manual gearbox, chosen in favour of the DSG automatic that was fitted to all earlier Cupras.

It has less power than a Renaultsport Clio, but the Cupra rarely feels that way on the road. Put your foot down and there’s hardly any hesitation before it launches forwards to take a bite out of the horizon. 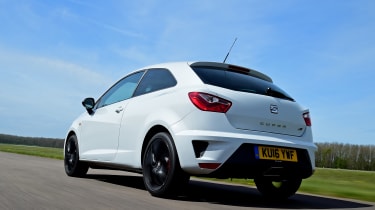 Where the Cupra falls down slightly is in the handling stakes, because while it’s good fun and can get you from one end of a country lane to the other pretty quickly, the Fiesta ST and Clio Renaultsport feel even more tenacious and resolutely tied-down.

A positive flip-side of this is that the Cupra is quite comfortable, with a less crashy and stiff ride than some hot hatchbacks. If you plan on driving around town and on the motorway more often than at Silverstone, this could be far more important than ultimate grip.

The standard SEAT Ibiza finished 62nd out of the 75 cars ranked in our 2017 Driver Power owner satisfaction survey of cars currently on sale in the UK. The Ibiza scored five stars when it was crash-tested by Euro NCAP in 2011.

All impressively low for a hot hatch

With fuel economy of 45.6mpg, the 1.8-litre turbocharged petrol engine is relatively efficient, and the Cupra also enjoys a fairly low insurance grouping and good residual values. CO2 emissions are 145g/km, which are about par for the course for a performance car like this. Plus, because it uses mainly VW parts, the Ibiza should be affordable to run and service in the long term.

The Ibiza Cupra is great to drive

As you’d expect from a performance model, the Cupra is really good fun to drive. The 1.8-litre TSI engine is excellent in all conditions, proving equally adept at town and motorway driving. If you’re gently cruising, it’s quiet and unobtrusive; when you want to drive in a more sporty way, however, it becomes even more impressive, responding quickly to your inputs and delivering its power with little hesitation. 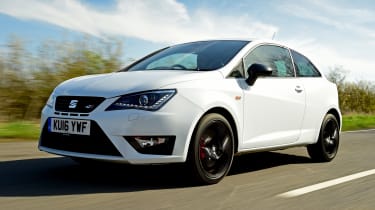 The handling is just as impressive, with body lean in corners virtually non-existent and lots of grip to keep you on course. You can adjust the suspension settings via the Drive Profile switch, which allows you to specify Comfort or Sports mode, depending on how you feel like driving. The steering could perhaps do with some more feedback, but that lightness also makes the car very easy to drive in town.

With a 0-62mph time of 6.7 seconds, the Cupra is seriously quick. The brakes are strong and effective, but you could upgrade them if you felt the need – and could afford the £1,000 cost. The standard six-speed manual gearbox is smooth and slick. SEAT used to offer the option of a DSG automatic gearbox with the Ibiza Cupra, but not after it was facelifted in 2015.

Tall rear passengers will struggle to get comfortable on longer journeys

The latest changes to the Ibiza Cupra included suspension improvements designed to make the car more comfortable. And there’s a noticeable difference – it's much better than it used to be at absorbing lumps and bumps. Wind and road noise are very low on motorways, too. Passengers in the front have plenty of space to stretch out, but back-seat occupants will feel short-changed on longer journeys. 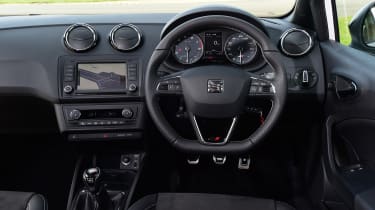 Combine all of the Cupra’s plus points with its good handling and you’ve got a fast car that's easy to live with on a day-to-day basis. Admittedly, it’s not as sophisticated as the Volkswagen Polo GTI that it’s based on, but that also makes it more appealing to buyers who want a practical supermini with some real power under the bonnet.

Style has taken precedence in the cabin

The price of the Ibiza Cupra's eye-catching style is reduced practicality. SEAT's designers have clearly put style first, especially inside. There’s only limited storage, with an average-sized glove compartment and door bins. The three-door Cupra's boot capacity is only marginally smaller than that the 292 litres you get in the five-door version of the regular Ibiza, but it'll still comfortably fit a week’s worth of shopping. Space in the back lags behind key rivals such as the Volkswagen Polo and Ford Fiesta, with shoulder room being especially limited. 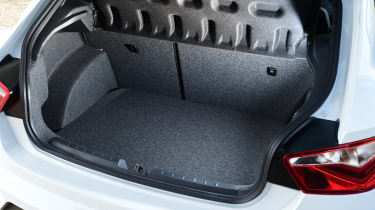 The standard SEAT Ibiza was rated poorly for reliability in our 2017 Driver Power owner satisfaction survey of cars currently on sale in the UK. Of the owners who responded, 5.1% reported experiencing a problem with their car at least once.

At least you can be sure the Ibiza will be pretty safe, thanks to its maximum five-star Euro NCAP crash-test rating. The Ibiza has front and side airbags, anti-lock brakes and electronic stability control as standard.

There’s no doubt that the Ibiza Cupra appeals to younger buyers. It looks the part, is enormous fun to drive and is available in a wide range of vibrant paint colours with stylish accessories.

Air-conditioning is standard in all Cupra models, as is electronic stability control, a Bluetooth phone connection and sat nav. For £145 extra, you could add SEAT's 'Full Link' smartphone connectivity suite, with Apple CarPlay, Android Auto and Mirrorlink, so whatever phone you have, you'll be able to pair it with the car. SEAT's Black pack added black wheels, red brake calipers, sat nav and Full Link for £800. 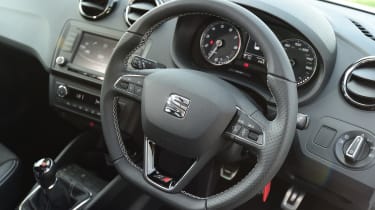 The Cupra doesn’t do as well as the likes of the Ford Fiesta ST and Volkswagen Polo GTI when it comes to resale values, and this isn't helped by the fact it's only available as an impractical three-door. This can make it a hot-hatchback bargain for savvy buyers. 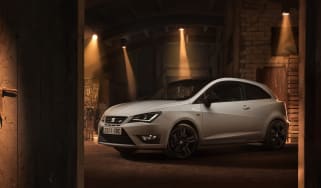 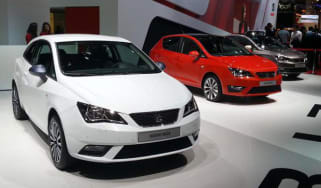