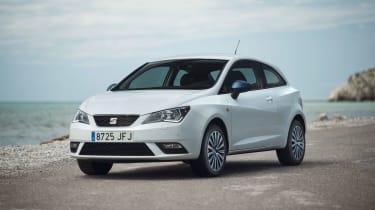 The 2015 SEAT Ibiza facelift will be at the heart of SEAT's stand at the Goodwood Festival of Speed later this month. It will be the first opportunity to see the car in the UK. It sports subtly revised styling, more efficient engines and fuel economy of up to 83mpg.

More customisation options will be offered, including interior colour packs that can be complemented with colour trims around the radiator grille and door mirrors.

Inside, the biggest change is the introduction of a new infotainment system. It now features MirrorLink technology, which mirrors certain smartphone apps on the car’s screen, as well as DAB digital radio and voice control. This puts the Ibiza on a level footing with the Volkswagen Polo and Skoda Fabia.

SEAT says the system is operated by a new, easier-to-use interface and works with both Apple and Android smartphones, integrating with Apple CarPlay and Android Auto. Indeed the firm has announced a partnership with Samsung.

The SEAT Ibiza’s safety credentials have been boosted, too. The new SEAT Ibiza features a ‘Tiredness Recognition Monitor’, which can detect if you become drowsy. Another clever piece of kit is ‘Multi-Collision Brake’, which automatically slows the car after a crash to prevent another. It’ll also activate the hazard lights to warn other drivers.

The new Ibiza’s suspension has been retuned for a sportier drive, and there’s the option of a system that can make the suspension softer or firmer depending on whether you want a more relaxed or a more sporty drive.

The new SEAT Ibiza’s engine range has been completely revised. Petrol buyers can choose from a 1.0-litre with 74bhp or a 1.0-litre ‘Eco TSI’ version with 104bhp. The latter is available with a DSG automatic gearbox.

There’s also a 148bhp 1.4-litre petrol, which can effectively shut down half of the engine when not needed in order to save fuel. SEAT claims this model is capable of 58.9mpg.

The most efficient petrol engine is a 94bhp 1.0-litre Eco TSI Ecomotive version, which promises almost 70mpg and CO2 emissions of just 94g/km.

The cheapest SEAT Ibiza to run will be the 74bhp 1.4-litre TDI diesel, which can return up to 83.2mpg and emits just 88g/km of CO2, so road tax costs nothing. There’s also an 89bhp version with an automatic gearbox and 74.3mpg fuel economy.

When the Ibiza goes on sale later this year, three trims will be available: S, SE and FR. SE models will feature air-conditioning and a colour touchscreen, while FR models will have sportier flourishes.

Although prices are still to be announced, we don’t expect them to change too much, meaning a £11,500 starting price is likely.

According to SEAT boss, Jurgen Stackman, the Ibiza is SEAT's most successful model with more than five million sold over the last 30 years.