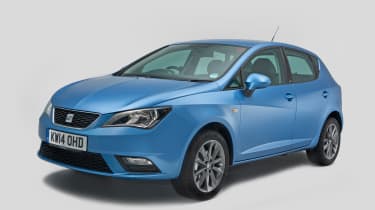 The SEAT Ibiza is to all intents and purposes a Volkswagen Polo dressed for a party. It shares many of its mechanical elements with the Polo, as SEAT is also part of the Volkswagen Group, but it both undercuts the Polo on price and offers a little more design flair than the VW.

The Ibiza is also cheap to run and decent to drive, while its five-star safety rating from the Euro NCAP crash test programme should provide peace of mind. (Bear in mind, however, that it was tested before the programme was made more stringent in 2009.) Whether you’re buying a used Ibiza as a first car, a runabout or a regular commute, it’s a sound choice

A lack of room for passengers on the back seats is a drawback in practicality terms but boot space is better; the five-door Ibiza has a 292-litre boot, while the three-door has 284 litres, which is better than the VW Polo (280 litres), Ford Fiesta (276 litres) and Vauxhall Corsa (285 litres).

The Mk4 Ibiza hatchback was launched in July 2008. It was initially available with 1.2-litre, 1.4 or 1.6 petrol engines before these were joined by 1.4- and 1.6-litre diesels in March 2009. The same year saw the arrival of an extra-efficient 1.2-litre TDI Ecomotive model and, by contrast, the black-nosed Bocanegra version as well as the FR and Cupra sports versions. An even more economical model, the 92g/km E Ecomotive was added in 2011, along with a punchy 1.2-litre petrol and a practical ST estate.

The start of 2012 brought a facelift for the Ibiza which involved some styling updates, improved interior materials and the option of an efficient, turbocharged 1.2-litre TSI Ecomotive petrol engine.

Which is the best SEAT Ibiza Mk4 version?

The turbocharging technology introduced with later engines makes them punchier and more economical than the engines originally available with the Mk4 Ibiza. The manual and DSG gearboxes are both good to use, so the choice is down to personal preference.

If possible, avoid the entry-level trim, called ‘S’, as central locking and a stereo are the only pieces of equipment worth mentioning. An SE model will add electric front windows, trip computer, split-folding rear seats and 15-inch alloy wheels, while Sport cars have firmer suspension, sports seats and bigger alloy wheels. Among the most useful extras that the original owner might have specified are climate control, Bluetooth and rear parking sensors, so look out for these in used car adverts.

SEAT Ibizas require servicing once a year or every 10,000 miles, whichever comes sooner. Services alternate between minor, which cost about £180 at a SEAT dealer, and major, which is around £230, though it includes a year’s breakdown cover. Every fourth service is a comprehensive one, so the cost rises to £260 or so.

All Ibizas have a cambelt that needs replacing every 80,000 miles/five years and this should come in at around £300 for a petrol model and £370 for a diesel. Brake fluid needs changing after the first three years of the car’s life then every two years after that.

Only a third of used Ibizas are diesel-powered, and these start from around £4,500 for a high-mileage 1.9-litre TDI. Cars with automatic gearboxes are even rarer still, so you may have to be less fussy about other specification if this is an essential. A budget of £6,000 should be enough to get you a 2009 1.6-litre petrol Ibiza that’s covered 25,000 miles, and a 1.2-litre petrol SE from 2011 with 50,000 miles will be about the same.

There have been two Mk4 Ibiza recalls. Cars built between 2010 and 2011 required a fix to the bonnet latch, which could prevent it from shutting properly. Fuel filters on 1.2-litre diesel models built from May 2010-October 2014 could crack, leading to fuel leaks, so check this work has been done. See the DVSA’s recall checker tool for more information.

If you like the SEAT Ibiza as an overall package, it’s likely you’ll also appreciate the Volkswagen Polo and Skoda Fabia, as all three share the same mechanical underpinnings. The Ibiza tends to be considered a little more stylish, the Polo of slightly higher quality and the Fabia as the best value.

The Ford Fiesta is one of the most obvious alternatives. It’s fun to drive, cheap to run and offered in a wide variety of trims, plus with so many on the market (the Fiesta has been the bestselling car in the UK for a while now) there are plenty to choose from.

The Peugeot 207 and Renault Clio are affordable and decent to drive, while the Vauxhall Corsa is spacious and usually reasonably priced because there are so many on the used car market.

The SEAT Ibiza isn’t the class-leader in the supermini field and it’s looking quite outdated, particularly with the recent arrival of the latest incarnations of its rivals. However, it’s still one of the best all-rounders on the used car market and good-value choice.