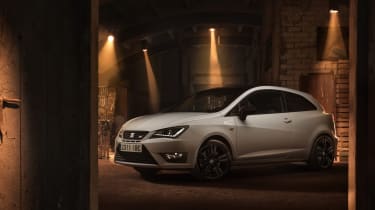 A new SEAT Ibiza Cupra has been revealed, with more power, an upgraded interior and a load of new technology.

Going on looks alone, you’d be forgiven for thinking that not much has changed compared to the previous version – and even SEAT acknowledges this. The brand says there was “little room for improvement” when it came to the exterior styling, which it claims is one of the main reasons for the Ibiza’s popularity.

The Cupra’s silhouette is unchanged, as are the sharp creases in the bodywork. LED headlights and rear lights can be seen in the pictures and the rear bumper with an integrated central exhaust is carried over from the previous generation, too. 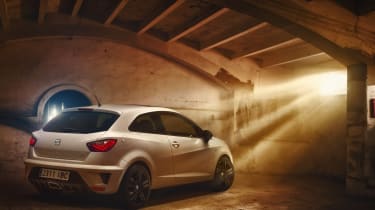 The ‘if it ain’t broke, don’t fix it’ approach to the outside contrasts hugely with the improvements made to the car’s mechanical parts and interior.

Gone is the old 1.4-litre TSI engine, replaced by a 1.8-litre TSI turbocharged petrol that produces 192bhp – 15bhp more than the previous generation. The sprint from 0-62mph is dealt with in just 6.7 seconds and top speed is now 146mph.

Those numbers are enough to worry one of our favourite hot hatchbacks – the Ford Fiesta ST. SEAT claims that the power boost makes for “incredibly forceful pulling power in any given situation”.

And unlike the previous Ibiza Cupra, which was only available with a DSG twin-clutch automatic gearbox, this new model is available with manual transmission. 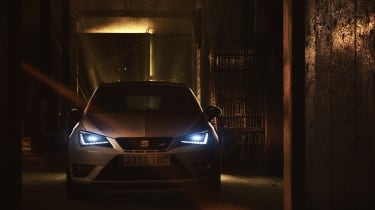 You can tweak the car’s handling behaviour to suit you using the Cupra Drive Profile function. Already seen on the SEAT Leon Cupra, this system alters the firmness of the suspension and the weight of the steering, offering Comfort and Sport settings.

SEAT also claims the new Ibiza Cupra is capable of returning 47mpg, which also comes close to beating the Fiesta ST’s figure. However, it doesn’t quite match the 52.3mpg managed by the Peugeot 208 GTi.

Inside, the Ibiza Cupra’s dashboard looks familiar, but influences from the larger SEAT Leon Cupra are evident. Along with the Cupra logo fitted to the gearknob and the flat-bottomed steering wheel, you also get part-leather sports seats and climate control.

The touchscreen infotainment system is similar to those in other SEAT, Volkswagen and Skoda models, but SEAT has added its own connectivity options. Along with the MirrorLink system featured in other VW Group models, SEAT’s Full Link system provides Apple CarPlay and Android Auto software for interfacing with your iPhone or other smartphone. 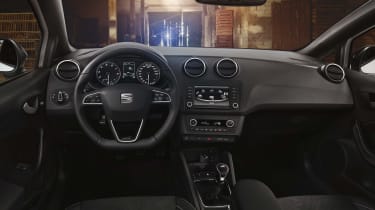 The new SEAT DriveApp pairs exclusively with the Full Link system, letting you personalise the touchscreen interface and adding a text-to-speech function that can read out posts from Facebook or Twitter from your smartphone. You can even find your car using the app’s GPS positioning.

There’s also the SEAT ConnectApp, which was developed in partnership with Samsung. SEAT says the app means that “the driver is ‘always on’, yet remains fully concentrated on the traffic.” It learns your personal preferences and can offer route assistance to frequent locations and notify you of upcoming appointments.

For more on the current SEAT range, check out Carbuyer’s reviews page.