The Skoda Octavia estate has an economical 1.6-litre TDI diesel engine, which can return 56.5mpg and emits less than 110g/km of CO2

No matter which variant of the Skoda Octavia Estate you choose, you’re unlikely to find it overly expensive to run. Even the most powerful, high-performance petrol vRS estate (which we’ve reviewed separately) can still return 38.2mpg. Also, although Skoda doesn’t offer quite as generous a warranty as certain other companies, the Octavia has proved very reliable.

Now the Octavia has been with us for a couple of years, we’re able to get a better idea of how strong its resale values are. You can expect to get between 40 and 45% of the original cost back if you sell it after three years. This compares well with rivals like the Ford Focus Estate, which returns around 39% of its original purchase cost. 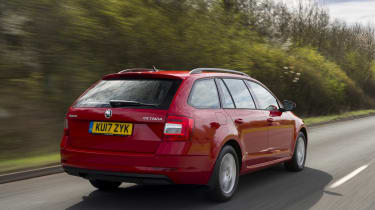 The economical 1.6-litre diesel will attract a lot of buyers with its promise of 56.5mpg and a CO2 figure placing it in the 29% Benefit-in-Kind (BiK) band. It’s not our favourite, though; we prefer the 2.0-litre diesel, which still returns 54.3mpg while bringing a useful increase in performance. Its CO2 emissions are still low, too – 113g/km for a 30% Benefit-in-Kind (BiK) tax rating for company-car drivers.

Even the petrol Octavias are reasonably economical and may suit drivers who are destined to cover lower yearly mileages. The smallest 1.0-litre engine is capable of exceeding 48mpg and – as it's unaffected by any diesel surcharge – it makes for an affordable, appealing company-car choice with its 25% BiK rating.

The 148bhp 1.5-litre engine makes sense if you make a lot of short journeys. It manages 46.3mpg overall and boasts a BiK figure of 27% thanks to a 119g/km CO2 emissions figure – a slight improvement on the 1.4-litre it replaced.

After the first year’s CO2-based road tax (generally included in the on-the-road price), all Octavia Estates will cost £140 a year to tax.

Insurance group ratings begin at group 14 for the least expensive S and the smallest diesel-engined SE, which rises to group 21 if you choose the 2.0-litre diesel. The most expensive Octavia Estate is the powerful vRS, which falls into group 29. Generally these ratings are a little higher than the Ford Focus Estate's, but the Octavia range is much broader in scope and the groupings aren’t at all bad for such a large and useful car.

Skoda has a very good and well deserved reputation for the reliability of their cars, but we think it’s a shame that its warranty isn’t more generous. A 12-year warranty against corrosion and three-year policy against paint defects is included and there’s a three-year policy with unlimited mileage in the first two years, but a 60,000 mile cap in the third.

This can be extended to a four-year/80,000-mile or five-year/100,000-mile scheme if you pay an extra £255 or £515 respectively. However, it’s a point of contention that certain rivals can offer so much more warranty cover as part of the deal; Hyundai and Kia, for example, offer five and seven years respectively.

The Octavia Estate brings a choice of servicing options. Simplest to follow is the fixed-interval regime, where the car is serviced once every year or 10,000 miles, and there is a service plan to cover your first two services at a cost of £279. That's the default choice and is recommended for anyone who covers a low annual mileage or is expecting to regularly subject their car to short, urban journeys where the engine might not reach optimal operating temperature and the car will be expected to do a lot of accelerating and braking.

If your motoring sees you spending more of your time on the motorway, performing mostly long, fast journeys where the car cruises at a sustained speed for hours on end, you may benefit from the variable-interval regime. This uses wear sensors on the car to determine when the car will need to be serviced, which could occur at any time from 9,000 to 20,000 miles, but won’t be any longer than two years between visits.