"The Skoda Octavia Estate is one of the most practical family cars available, with loads of space, economical engines and tough build quality"

If your main priorities are maximum space with minimal running costs, the Skoda Octavia Estate should definitely be on your shortlist. Not only do its on-paper stats shame many of its rivals, it has a modern, classy interior and drives well, too.

That’s despite its competition including luminaries like the Volkswagen Golf Estate, SEAT Leon ST Estate, Ford Focus Estate and Vauxhall Astra Sports Tourer, along with the Kia Ceed Sportswagon, Hyundai i30 Tourer, and Peugeot 308 SW. The latter actually beats the Skoda for sheer luggage space, but we reckon the Octavia is the best all-rounder thanks to its great interior and low price. 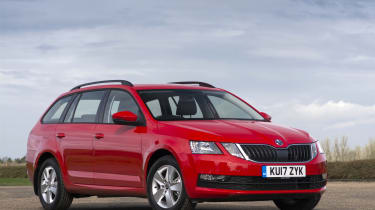 While the Octavia doesn’t offer a thrilling drive, it’s still highly enjoyable, with plenty of grip and precise steering that helps it to feel safe and confidence-inspiring. It’s not as much fun as a Ford Focus Estate, but it’s arguably better at soothing away long journeys. Following an update, it’s sharper to look at, too, with LED running lights, a broad grille and the split headlamps that have become a Skoda design hallmark.

The engine line-up will be familiar to anyone used to driving VW Group models, with petrol and diesel engines including the frugal 1.6-litre diesel which can manage up to 56.5mpg, as well as a sophisticated 1.5-litre petrol engine that returns up to 46.3mpg thanks to active cylinder technology (ACT).

For drivers after more performance, there are petrol and diesel versions of the Skoda Octavia vRS Estate, while the Skoda Octavia Scout offers raised ground clearance, a tougher look and four-wheel-drive. We’ve reviewed both separately, although you can't currently order a Scout from the factory.

In our view, the 2.0-litre TDI diesel with 148bhp is the pick of the range, with plenty of performance (0-62mph only takes 8.5 seconds), yet fuel economy can still reach up to 54.3mpg. We reckon this drop in economy compared to the 1.6-litre diesel is acceptable, as the extra power makes it a far more relaxing car to drive and much better suited to towing or carrying heavy loads.

The petrol engines are well suited to those who cover less than 12,000 miles a year, or primarily drive in urban areas. Although a 1.0-litre engine sounds rather small for a car like this, it offers surprisingly strong – and smooth – performance, reaching 62mph from rest in around 10 seconds and returning up to 48.7mpg, a figure that was the preserve of diesel cars until recently. Alternatively, the 1.5-litre has 148bhp and is pretty quick – it manages 0-62mph in eight seconds.

You don’t have to get the rugged Octavia Scout to enjoy four-wheel drive; it’s available with the 2.0-litre diesel in 148 and 181bhp guises, and the 2.0-litre 187bhp petrol, and can certainly add extra capability for driving in wintry conditions or along a slippery track. The downsides are that it costs around £1,500 extra, reduces fuel economy and doesn’t offer much benefit in normal driving, so we’d stick with front-wheel drive unless you live somewhere that means you really need it.

There’s a serious amount of space inside the Octavia Estate, with loads of headroom and legroom for tall adults in the front and rear seats. The looks are slightly utilitarian, but far from downmarket, just easy to use and well constructed without being too showy. On the move, the Octavia is as comfortable as you’d hope, with supple suspension and annoying tyre roar and wind noise kept to a minimum, even at motorway speeds. Optional adaptive suspension offers three driving modes, but there’s little difference between them.

Aside from the Scout and vRS models, which are best regarded as separate versions altogether, there are six trim levels, called S, SE, SE Drive, Sportline, SE L and Laurin & Klement. Even the S model is respectably equipped, with alloy wheels, Bluetooth and air-conditioning. For a good compromise between affordability and kit, our choice would be the SE, which includes useful rear parking sensors – a godsend with long estate cars – front foglights, cruise control and a selector to switch between Normal, Eco, Sport and Individual driving modes.

The SE Drive model gets highlights including sat-nav, wifi and larger alloys, while the SE L has Alcantara and leather upholstery, LED headlights and tinted rear glass. SE Drive trims and above feature Skoda’s Amundsen infotainment system with an eight-inch touchscreen, which is clear and intuitive to use. Sportline features sportier styling inside and out, while L&K models are the best-equipped and most luxurious in the range. 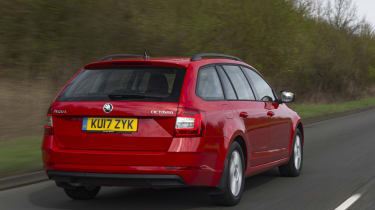 Skoda has a stellar reputation among owners and the Skoda Octavia finished a respectable 28th out of the 100 cars ranked in our 2019 Driver Power owner satisfaction survey of cars currently on sale in the UK. The brand finished fifth out of 30 manufacturers in our survey.

Crash-tested in 2013, the Skoda Octavia received the full five stars from Euro NCAP, with particular praise for its ability to protect occupants. A full roster of airbags is fitted, and the SE L model has autonomous emergency braking as standard, confirming the Octavia as a safe, practical and easy-to-own family car.