Practicality is core to the appeal of the Skoda Octavia Estate and neither the luggage nor the passengers are likely to complain too loudly about a lack of space. Compared to the previous model the load capacity has slightly improved and the 30-litre bigger boot also has a wider opening to improve access. 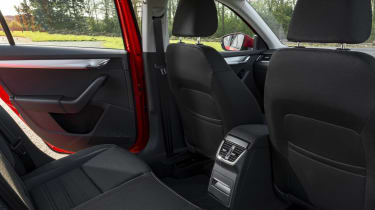 You’ll find more space than a Ford Mondeo or a Mazda6 inside the cabin of an Octavia Estate, it’s able to comfortably accommodate five grown people with legroom and headroom to spare, as long as you’re not in the middle rear seat which does have rather restricted space for your feet.

There are plenty of little storage cubbies in which to place those little odds and ends that you might want during a journey, as well as a well-sized glovebox capable of taking a large bottle of water. In SE models and above there is a folding centre armrest in the back that also features a pair of cup-holders. 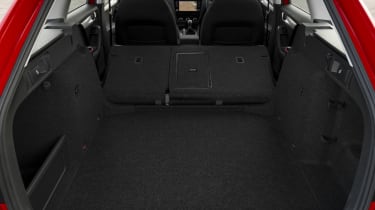 With a keen eye on practicality, every Octavia is better at load carrying than the equivalent Volkswagen Golf, but the estate is a luggage-lugging tour de force, able to hold 610 litres of freight. That’s a figure which can only be beaten by the 680-litre Peugeot 308 SW. However, we still rate the Octavia as the better all-rounder.

This huge amount of space can be further expanded by dropping the rear seat back, reaching 1,740 litres and beating certain cars from the class above – the Ford Mondeo and Mazda6 for example. There is also a useful false floor under which valuables can be hidden, and as an optional extra the front passenger seat can be made to fold down if you’re looking to carry a really long load. There’s also a convenient 12v socket and carrying hook to prevent loose items wandering around.

Slight complaints are that the luggage net package, an extra cost of £55 on every model in the range, really ought to be made standard equipment. Plus that folding rear seat back doesn’t drop quite as flat as we’d like it to.

The Octavia Estate has always been a popular tow-car choice, and with its capabilities it’s not difficult to see why. The 1.0-litre petrol engine has the lowest towing limit at 1,300kg. The other engine choices can manage between 1,500 and 1,800kg, while the greatest towing capacity is offered by the 2.0-litre 148bhp diesel in conjunction with four-wheel drive, at 2,000kg. An optional Trailer Assist system provides guidance to help revering the Octavia when a trailer is attached.