Not as much fun as a Ford Focus, but the Skoda Octavia estate is relaxing and quiet to drive

Skoda has equipped the Octavia Estate with a choice of engines familiar from the Volkswagen Golf, all of them economical and some, especially the petrols, rather quick.

The driving experience is very similar to that of the Octavia hatchback – unexciting but capable. There’s plenty of grip and a real feeling of safety, while the car is far from out of its depth on a fast country road, but the Ford Focus Estate is sharper and more responsive to drive.

An adaptive suspension damping system is available as an optional extra, with comfort, normal and sport modes, but neither seem to make a huge difference to the way the car drives when in use. Whatever model you choose, the Octavia Estate is a comfortable, safe way for five passengers and a lot of luggage to travel long distances.

The standard six-speed manual gearbox has a pleasingly snappy action between gears and there's a very good DSG automatic gearbox available. This blunts acceleration slightly, but actually also slightly improves fuel-efficiency. If the latter is less important to you than all-weather traction on loose or greasy road surfaces, four-wheel drive can be chosen on 2.0-litre diesel models, with either the manual or DSG automatic gearbox. 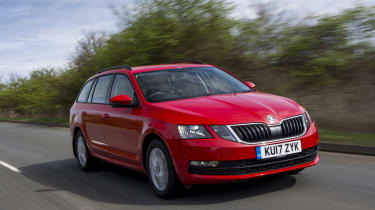 The performance crown is worn by the vRS estate, reviewed separately. It appeals to those looking for estate-car practicality but who still want the youthful exuberance of a sporty car. Effectively a Volkswagen Golf GTI with a much bigger boot, it’s capable of 0-62mph in 6.7 seconds and the acceleration doesn’t cease until it reaches a storming 153mph. It seems expensive – around £28,000 – but it’s still less costly than the Golf GTI.

Even the smallest 1.0-litre TSI engine is reasonably endowed with performance; it can cover 0-62mph in 10 seconds and returns up to 48.7mpg. We reckon the 1.0-litre is a really responsive and enjoyable engine to use.

The 1.5-litre uses cylinder deactivation technology to that improve fuel economy without sacrificing power – it effectively reduces the size of the engine when full power isn't needed. It produces 148bhp and enables the Octavia to accelerate from 0-62mph in just over eight seconds.

Its punchy response makes it particularly well suited to overtaking and joining fast-flowing motorway traffic, but if anything its quietness is even more impressive. At town speeds it really does fade into the background and rarely emits anything more than a tolerable hum when you pick up speed.

The most economical diesel version is the 1.6-litre TDI, returning 56.5mpg, and not entirely at the expense of performance. It still manages to hit 62mph after 10.4 seconds. However, moving to the more powerful (and more expensive) 148bhp 2.0-litre diesel still brings a good balance of economy and power. It can sprint from 0-62mph in 8.6 seconds.

The vRS can also be had as a diesel – with 181bhp, it roars to 62mph in around eight seconds, but it isn’t as quick as the petrol and we’d rather have the economy of the 148bhp car.