Every Skoda Octavia is good to drive, but it’s not as much fun as some rivals

The latest Skoda Octavia is a little lighter than its predecessor and has livelier handling as a result. However, it’s still not the most dynamically rewarding car to drive – rivals such as the Ford Focus, SEAT Leon and Vauxhall Astra are more fun through corners.

While the steering is nicely weighted, it’s not especially responsive and doesn’t give you much feedback. There’s a little body lean, too, although there’s enough grip for corners to be taken quickly. Of the lot, we found the 1.0-litre petrol – with its smaller and lighter engine – the most enjoyable to drive.

Where the Octavia does pull some points back over its rivals, though, is in ride comfort, which feels nicely controlled over rough road surfaces. Even models on larger wheels do a good job of smothering bumps, with only deep potholes and really poorly surfaced roads upsetting its composure. 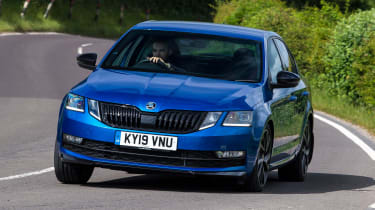 SE models and above get a Driving Mode Selection feature, which allows you to alter the engine’s throttle response and steering weight at the touch of a button, making the car feel sportier or more relaxed depending on your preference. Unfortunately, weak customer demand means there’s no longer an option to add the Dynamic Chassis Control dampers, which allowed you to stiffen or soften the suspension at the touch of a button. This system is now only available on the vRS.

Even the 1.0-litre TSI petrol engine will get the car from 0-62mph in a fairly brisk 10 seconds, eventually hitting a top speed of 125mph. It's incredibly smooth too, unless you start to work the engine hard. This makes it ideal for town driving, but that's not to say it can't cruise at motorway speeds. In fact, it does this with a relaxed pace that belies its compact size.

If that’s not quick enough, there's also a 148bhp 1.5-litre TSI. 0-62mph acceleration takes just under eight seconds, while fuel consumption is kept in check by clever cylinder-deactivation technology, which is claimed to react so quickly as to be unnoticeable on the road. It feels quick and top speed is an impressive 136mph where it's safe and legal to do so. It's fairly quiet, too – barely audible when tootling along and remaining subdued even when worked hard. 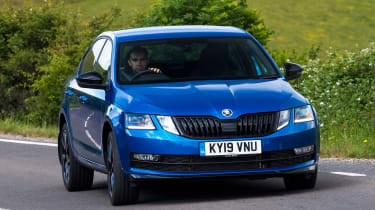 At the top of the range is the 187bhp 2.0-litre, which is a detuned version of the unit used in the vRS. That said, it’s still a muscular and eager performer, combining with the quick-shifting seven-speed DSG gearbox to sprint from 0-62mph in 7.3 seconds and on to a top speed just shy of 150mph.

Both Octavia diesel engines sound a bit clattery on start-up, but get smoother and quieter once you're up to speed. They offer effortless performance in the Octavia, allowing it to comfortably overtake slower traffic and breeze up steep inclines.

The 1.6-litre TDI is marginally the smoothest of the Octavia’s diesel line-up, plus it has enough performance for most situations. The six-speed manual’s 0-62mph of 10.2 seconds won’t set any records, but with a useful 250Nm of torque at just 1,750rpm it pulls extremely well from low revs, even when fully loaded.

The 2.0-litre TDI produces 148bhp – enough to manage 0-62mph in 8.5 seconds with the slick-shifting manual gearbox, or 8.6 seconds when the dual-clutch DSG automatic is fitted. Its plentiful pulling power even at low engine revs makes the Octavia very relaxing to drive. In many respects, it’s the engine that best suits the no nonsense Octavia.