Skoda's parent company Volkswagen has been careful to make sure the Octavia doesn't tread on the toes of the Volkswagen Golf, so you'll notice the Skoda is a little noisier on the motorway. Still, wind noise isn’t too intrusive and passengers are also well insulated from engine noise – although there's some noticeable clatter from the diesels.

Although the suspension feels a little stiff, too, especially around town, where the Skoda can sometimes crash uncomfortably into potholes, it settles down nicely once cruising speeds are reached.

Like its exterior styling, the Skoda Octavia’s interior feels a little low-key. There’s nothing wrong with its quality, which is a match for the Volkswagen Golf’s – it just lacks the design flair you get in a SEAT Leon or Ford Focus. It’s certainly up to scratch when it comes to technology – there’s an eight-inch Bolero infotainment system with Apple CarPlay, MirrorLink, Android Auto and SmartGate connectivity included, and this can be upgraded to a 9.2-inch Columbus system with a really clear capacitive touchscreen like you'll find on a smartphone. 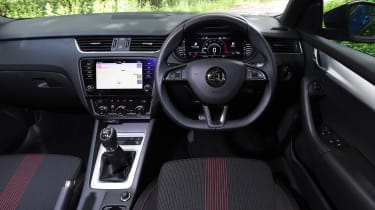 The dashboard is clearly laid-out, with a large, chrome-ringed speedometer and rev counter in front of you, an intuitive touchscreen infotainment system and well placed air-conditioning controls.

You’ll find plenty of soft-touch plastics throughout the interior, while the use of silver-finish trim on the centre console and doors helps lift the otherwise dark and sombre cabin. The fit and finish are also excellent, helping give the interior a robust feel. It should prove to be more than up to the challenges of family life.

Better still, all versions of the Octavia have a soft, leather-trimmed multifunction steering wheel, which adjusts for height and reach. There’s also a wide range of seat adjustment for the driver, so finding the perfect driving position is easy. Visibility is good, too, although the Octavia’s long rear overhang (the bodywork behind the rear wheels) means parking sensors are a necessity. They’re standard on all versions except the entry-level S, where they’re an optional extra.

On all models, standard kit is very generous. Entry-level S has air-conditioning, Bluetooth, DAB digital radio, a USB port and a trip computer. The SE adds dual-zone climate control, electric rear windows and a driver fatigue sensor, which monitors your steering inputs and sounds a warning if it suspects you’re starting to nod off.

Sitting just above SE trim is the SE Technology and SE Drive, which both are is aimed at business users and essentially adds sat nav, a wi-fi hotspot to the otherwise well-equipped SE. 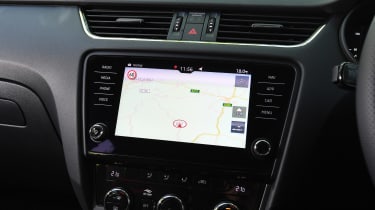 Next up is the Octavia SE L, which adds desirable features such as leather and Alcantara suede fabric on the seats, a full-colour display for the trip computer and adaptive LED headlamps. Crucially it gets the handy Skoda umbrella, which is stored underneath the front passenger’s seat.

Further up the range is the Sportline, which features many of the SE L’s high grade features but adds a number of performance orientated touches. On the outside there’s special 18-inch wheels and lots of gloss black trim, including the front grille and the tailgate spoiler. Inside it’s identified by its sports front seats and chunky three-spoke steering wheel.

The Laurin & Klement model previously sat at the top of the Octavia rangel, but it’s £4,000 premium over the SE L didn’t give it a positive reception from buyers and it was withdrawn from sale in early 2019. Used buyers might be interested to know the L&K came with its own 18-inch alloy wheels, leather and suede-like Alcantara trim, heated seats and steering wheel, adaptive cruise control and lots of L&K logos. The added extras made it feel much more upmarket and it was clearly aimed to rival small executive cars like the Mercedes C-Class and BMW 3 Series.

While all versions of the Skoda Octavia have lots of standard kit, there are still one or two optional extras that are worth splashing out on. We’d certainly consider ticking the box for the £600 Winter Pack, which adds heating for the windscreen, washer-jet nozzles and front seats. Another worthwhile addition is the keyless entry and go package, which costs £400 – that’s around half the price of the equivalent Audi system.

One notable option is the 9.2-inch Columbus infotainment system, which includes online connectivity that provides a wi-fi hotspot in the car. It’s terrifically easy to use, with a capacitive touchscreen display that recognises the same pinch-to-zoom gestures as a tablet or smartphone. It looks good, too, adding a real touch of modernity to the Octavia’s simple interior. The same is true of the Virtual Cockpit (£450) that replaces traditional instrument dials with a digital display capable of showing five different layouts.

The Octavia now offers many of the latest hi-tech safety systems as options. They include a rear-view parking camera for £300 and front assist (which automatically brakes the car if it senses an impending collision). The latter is standard on SE L and above and a £315 extra elsewhere in the range. You can also add adaptive cruise control for £250.

Other worthwhile options include a small umbrella that stows under the front passenger seat and mounting brackets enabling rear passengers to hang a tablet off the front headrests. There's also a 'Phonebox' option – a cubby in the centre console that will wirelessly recharge your phone and boost its signal using the car's aerial.