Driving the Forester, you’ll find there's not too much feedback through the steering wheel, but there is lots of grip from the wide tyres. Four-wheel drive makes this a confidence-inspiring vehicle on a demanding road, while reasonably firm suspension means it stays more composed through corners than taller SUVs, too.

For an SUV, the suspension is quite firm, but it rarely sends thumps through to the cabin. Instead, it resists the wallowing some SUVs suffer with. There's some road and wind noise at higher speeds and models with the Lineartronic CVT gearbox can sound strained, as the engine seems like it's working hard when you accelerate. 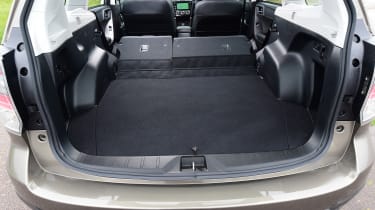 The Forester is fitted as standard with a six-speed manual gearbox, but can be specified with the somewhat frustrating Lineartronic CVT automatic transmission, which spoils refinement as it holds the engine at high revs when you accelerate. We'd save £2,000 and choose the manual instead.

We also have reservations over the artificial "gears" that have been incorporated into the CVT system. A CVT transmission, as the initials suggest, are supposed to be Continually Variable. We understand why Subaru has indexed certain ratios, but it does seem contrary to the whole point of such a gearbox in the first place.

Ride quality isn't quite as good as a Volkswagen Tiguan's, but the trade-off is sportier handling. Lineartronic versions are fitted with an 'X-Mode' system designed to assist with off-roading by holding the car at a low speed when you're descending steep drops and making the accelerator less sensitive, helping you to avoid spinning the wheels.

There are two petrol engines offered: a standard 2.0-litre that produces 148bhp and the one in the range-topping XT trim, which gets 238bhp and is only available with the unimpressive Lineartronic automatic gearbox. It’s definitely fast on paper (0-62mph takes just 7.5 seconds), but doesn't feel that quick to drive, and its poor fuel economy is likely to make it difficult to sell on the used market.