The petrol Subaru Forester is rather thirsty, but the diesel has been discontinued

While most SUVs save fuel by switching to front-wheel drive in normal driving conditions, the Subaru Forester is constantly sending its power to all four wheels. This makes it great off-road, but also quite partial to fuel the rest of the time. The optional Lineartronic CVT automatic gearbox doesn’t help in this regard, either.

The 2.0-litre petrol is pricey to run, with fuel consumption between 40.9 and 43.5mpg and CO2 emissions of 150-160g/km, putting it in the 31-33% BiK bands. Choosing that automatic gearbox results in the lower figures, because it has been designed for efficiency. Petrol rivals like the Volkswagen Tiguan are more economical, with the 1.4-litre TSI returning just under 50mpg.

While it's by far the quickest Forester, the turbocharged 2.0-litre XT petrol model is likely to be a niche choice, because its 33.2mpg economy and 197g/km of CO2 emissions make it as expensive to run as some sports cars and put it in the top 37% BiK band for company-car drivers. 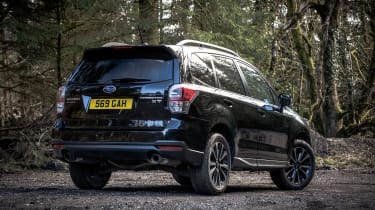 The Subaru Forester starts in insurance group 16, but the powerful range-topping XT version will cost more to cover. This is rated in group 34 due to its high performance and higher list price.

Like all Subarus, the Forester comes with a very solid five-year/100,00-mile warranty – equal to Toyota and almost as good as Hyundai and Kia’s cover.

Unlike many manufacturers these days, Subaru doesn’t offer fixed-price servicing arrangements, so the cost of maintaining your Forester is up to your local dealer. They may not be that local, though, as Subaru has a fairly limited network compared to some bigger manufacturers.