This is where the Forester really comes into its own – it's built to last, with all of Subaru's know-how from competing in rallying and a long tradition of building models with four-wheel drive. It always scores highly with owners and has a very loyal fanbase – particularly among farmers and others who live in rural areas. Good crash-test scores mean you can be confident the Forester will protect you and your family in the event of a crash.

Looking around the cabin, it doesn't appear as classy as the competition, but the materials are undoubtedly hard-wearing and should last the lifetime of the vehicle. Similarly, the exterior of the car isn't flashy, but look under the bonnet and you'll find top-notch components and engineering.

The Subaru Forester was rated highly for reliability in our 2017 Driver Power owner satisfaction survey of cars currently on sale in the UK. However, of the owners who responded, 20.4% reported experiencing a problem with their car at least once. The one area where Subaru owners seem disappointed most ofen is running costs. While your Forester is unlikely to break down as long as you maintain it properly, doing that will likely set you back a bit more than it would for some rival cars. 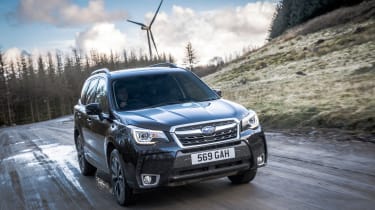 The Forester is impressively safe for families, with a five-star overall score in Euro NCAP crash tests and a 91% rating in the child protection category, ahead of the Ford Kuga, Mazda CX-5 and VW Tiguan, which score 86, 80 and 80% respectively. The Subaru is also fitted with front, driver's knee and side airbags, along with technology to help prevent skids and ISOFIX child-seat anchor points. You also get the added advantage of that special stability control programme while you're towing and the permanent four-wheel drive system gives you greater security in slippery conditions.