“It’s not very stylish, but the Subaru&nbsp;Forester is a practical, reliable and&nbsp;good-to-drive family-size SUV”

Now in its fourth generation, with the facelifted model being distinguished by a new chrome grille, the Subaru Forester was a pioneer of the now-ubiquitous ‘family crossover’ class of car when it first launched in 1997. It brings together rugged styling, four-wheel drive and a large estate-car body – a formula that’s become very familiar in recent years.

You could be forgiven for missing the Forester if you were in a hurry, as it doesn’t boast particularly distinctive styling. Subaru has always been more about practical engineering than stylish flair, so this car can’t help but look a bit dowdy next to the likes of the Mazda CX-5, Honda CR-V, Volkswagen Tiguan, Nissan Qashqai and Ford Kuga. It still has a certain unpretentious charm, though, and lots of handy features that tend to make Subaru owners loyal to the brand.

That estate-car body and a large glass area make for a bright, spacious and airy-feeling cabin, with a great view out for all occupants along with a large 505-litre boot for their luggage. Suburban sophisticates looking to cut a dash will probably be unimpressed, but more practical-minded country dwellers will find a lot to like about the Forester. 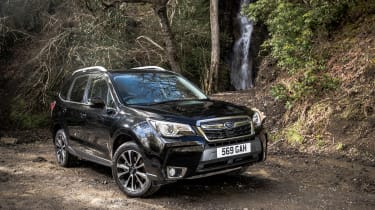 Four-wheel drive, powerful engines and legendary dependability make for a formidable combination in the Forester, especially for those who need a reliable workhorse as well as a big family car. It came an impressive 10th place out of the top 75 cars in our 2017 Driver Power customer satisfaction survey.

An entry-level 2.0-litre petrol engine powers the XE and XE Premium models, while the range-topping XT has its own more powerful 2.0-litre turbocharged engine. As for the diesels, Subaru has discontinued these in the UK.

You also have a choice of regular six-speed manual or Lineartronic automatic transmission on all models except the XT, which is only available with the auto ‘box.

Running costs are never going to be one of the Forester’s selling points, with fuel efficiency ranging from between 33.2 and 43.5mpg, while CO2 emissions stand at between 150 and 197g/km.

The Subaru Forester finished 10th out of the 75 cars ranked in our 2017 Driver Power owner satisfaction survey of cars currently on sale in the UK, but didn't appear in our 2018 results. Safety shouldn’t be an issue, either, thanks to a five-star Euro NCAP rating and Subaru’s EyeSight driver assistance technology being fitted as standard on all models. The Forester comes complete with a host of airbags, an electronic stability control programme which has been optimised for towing a trailer and new headlights which turn with the steering to better illuminate the road ahead.