To appreciate the Forester's interior, you almost need to adopt a different state of mind. Instead of looking for plush soft-touch materials (there aren't many), you need to appreciate the practical touches that make life easier. For example, the windscreen pillars have been moved forwards and tall windows reduce blind spots, giving a light and airy feel to the cabin. Nevertheless, the interior feels rather old-fashioned compared to that of the similiarly-priced BMW X3.

The seats are comfortable and the XE Premium, XC Premium and XT trim levels feature leather upholstery. All models have an eight-way electrically adjustable driver's seat and rear seats that recline, which is particularly handy if you're planning on carrying long loads.

Despite its boxy shape, the Forester insulates its occupants well from wind and road noise at speed, even if the diesel engine is a little noisy at tickover.

Like the rest of the Forester’s interior, the dashboard is rather plain and unglamorous, but it’s tough and robust and won’t fall apart at the first sign of rough treatment. There’s a nice big storage bin in front of the gearstick and you’re not overwhelmed with buttons, either – it’s all pretty simple and straightforward – if not exactly stylish. 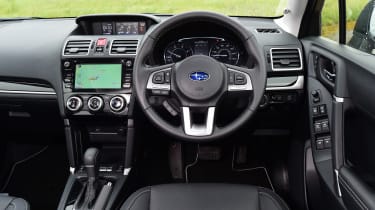 On the XE, Bluetooth and cruise control are standard, along with a reversing camera, dual-zone air-conditioning, automatic windscreen wipers, folding door mirrors, a sunroof and enhanced HID headlights. XE Premium and above get sat nav. The range-topping XT model adds 18-inch alloy wheels, LED lights and twin exhaust pipes to this equipment list.

A pretty responsive touchscreen is standard on all trim levels. There are USB sockets for charging devices as well as playing music and a multi-function display shows vital information such as temperature, the condition of the four-wheel-drive system and even a turbo boost gauge on the XT. It generally works well, and the screen resolution has recently been increased but the screen still reflects sunlight quite badly.

Optional extras have always been thin on the ground with Japanese-built cars like the Subaru Forester – they tend to be better-equipped than their European counterparts in the first place and if you want more kit, you just move up to the next trim level.