Many buyers looking for a supermini will expect it to be easy to drive around town, and the Suzuki Swift's accurate steering and light weight make it easy to dash around in. Compact dimensions mean it’s easy to park, too.

The best part about the Swift, though, is how it handles on an open road in the country – it feels very nimble and quick around corners, so it's great fun to drive if you want to just take it out for the sake of it. In fact, it's almost as fun to drive as the superb Ford Fiesta, which leads the class in this respect.

The automatic gearbox makes the car feel a bit more sluggish and doesn't suit the Swift’s ethos of simple fun, so we'd avoid it if possible.

The Swift is powered by a choice of two 1.2-litre petrol engines. The regular version produces a healthy 93bhp and is a strong performer for a car like this. It can sprint from 0-62mph in 12.3 seconds, which is quite a bit quicker than a comparably priced VW Polo or Renault Clio.. It does need to be revved quite hard to get the most speed out of it, however, so it's not the most refined choice. 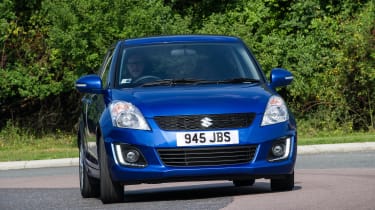 If you're choosing the well-equipped SZ4 trim, we'd recommend also going for the newer 1.2-litre Dualjet engine. It develops a little less power (89bhp to be exact), but this has barely any effect on the performance of the car. Plus, although it costs £500 than the other engine, you'll find running costs are markedly reduced.

The Swift 4x4 also feels very similar to the standard front-wheel-drive version, so there are no worries about the engine being out of its depth in this case.

There are currently no diesel engines available for the Suzuki Swift, but don't be put off by that. We'd expect most people looking at a supermini to be mainly using it for shorter non-motorway trips – and buying a diesel for that purpose is often a mistake. Costly repairs and higher purchase prices for diesel models tend to be a thorn in the side of small-car buyers.