Boot space in the Suzuki Swift is somewhat lacking, but it's still fit for purpose

Being a supermini, the Suzuki Swift was never going to be the most practical car – but even compared to its rivals it loses out quite a bit. The Swift's dimensions have increased over the years it’s been on sale, thanks to a round of updates the brand has made to the car, but it's still smaller than a Nissan Note or Honda Jazz inside.

Those are the top cars to go for in this class when it comes to practicality, but the Swift even trails the Peugeot 208, Ford Fiesta or Renault Clio – cars that aren't particularly focused on maximizing interior space. It's not all bad, though: you do get folding seats in the back and the Swift is very easy to park thanks to its light steering and small size. 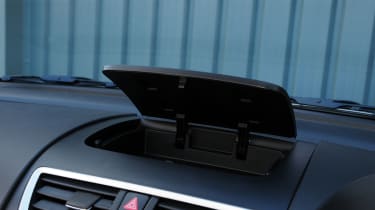 The Swift's rear headroom falls behind its rivals’ – the Renault Clio, for example, has quite a bit more room in the rear for taller passengers. It's available with five doors if you need the extra room to climb in the back, but we wouldn't recommend a long journey with tall passengers, as their necks might not be too happy afterwards.

There’s a decent amount of interior storage, however, which makes the Swift a good companion for kids: there are long door bins for water bottles and a large glovebox for storing those all-important travel sweets. ISOFIX child-seat mounts are present in the back, too.

Visibility for the driver is good and there aren't too many blind spots – this makes parking easier and gives you extra confidence when driving in the city.

The Suzuki Swift's 211-litre boot is a long way behind its main rivals, which is disappointing. The Peugeot 208, Renault Clio and Ford Fiesta all beat it in this respect, especially as most of the Swift's space is vertical, making it hard to load longer items such as buggies. 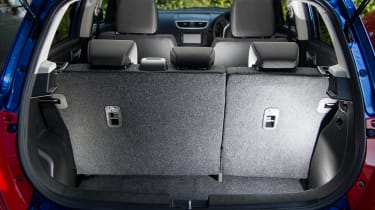 In fact, even the Skoda Citigo, a smaller model from the city-car class, can hold 251 litres of luggage in its boot – 40 more than the Swift – and the Honda Jazz trounces the little Suzuki with its 379-litre capacity.

There's the option of a five-door model to boost practicality a bit, but the 60:40 split-folding seats in the back don't go down completely flat. The boot door does open nice and wide, though, so it's not all bad news. We'd go for the five-door model if you need to fit a child seat.