The Suzuki Swift often gets overlooked, because models like the Ford Fiesta, Vauxhall Corsa and Volkswagen Polo sell in such vast quantities, they tend to hog the limelight and become the default choice for supermini buyers. That’s a shame, because the Swift is stylish, enjoyable to drive and undercuts most of its rivals on price. In fact, if you’re interested in the Swift, the only real reason to hold off on buying one is because a new model is on its way.

When it arrives, it’ll replace a car that was first launched in 2005, and while that’s a long time ago, the Swift has been given a new look and updated technology over the course of its life. Suzuki even released a popular ‘warm’ hatchback version, called the Swift Sport, which we’ve reviewed separately. With bargains likely as this generation of Swift goes out of production, it’s still a good buy that can be more fun to drive than rivals like the Hyundai i20 and Kia Rio. 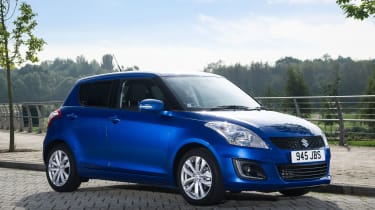 Customers can choose from a sportier three-door or more practical five-door bodystyle for £500 extra, while under the bonnet there’s the choice of two 1.2-litre petrol engines. Surprisingly, there’s the option of four-wheel drive to help owners who live in areas with poor roads and frequent bad weather, but there isn’t a diesel model. Saying that, the petrol is designed for economy, returning over 50mpg.

The Swift has a rather unique style, looking quite upright, but not feeling like it’s going to topple over in corners. Quite the contrary actually: the Swift is great fun to drive along a tight and twisty road, with communicative steering and taut suspension.

Perhaps the best word for the interior is ‘functional’, because there’s little flair and no expensive soft-touch materials like you’ll find in a Volkswagen Polo. The Swift is also fairly compact, so rear-seat space is at a premium, especially compared to a Skoda Fabia. Look beyond this, however, and the Swift is quite well equipped, with features in the SZ-L model like 16-inch alloy wheels, cruise control, sat nav and DAB digital radio.

Safety shouldn’t be a worry, as the Swift secured a five-star crash-test result from Euro NCAP and has an impressive roster of airbags for a small car. It should prove good to own too, with a 58th-place finish out of 150 models in our 2016 Driver Power owner satisfaction survey – not bad going for a car coming to the end of its life.