The Suzuki Swift isn't the last word in low running costs, but its single petrol engine is reasonably efficient

The Suzuki Swift is a small, light car that’s powered by a small engine. Of the two 1.2-litres available, only one is efficient enough to compete with the latest engines offered by the competition, but neither is what you’d call thirsty.

There's no diesel option for the Swift, but that’s fine for the kind of driving cars like this are mainly used for. When nipping around town and making shorter journeys, a small petrol engine is ideal and we wouldn’t recommend a diesel for that anyway. A diesel would likely be more expensive, too, and with its petrol engines the Swift is rather good value compared to 1.2-litre rivals. 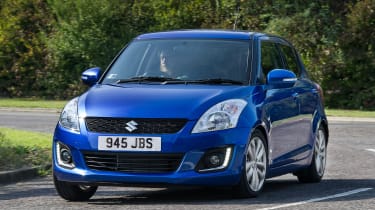 The standard 1.2-litre petrol engine returns 56.5mpg and emits 116g/km of CO2. Some of the Swift’s rivals, such as the Ford Fiesta, VW Polo and Vauxhall Corsa, have a huge range of engines to choose from and allow you to pick one that emits less than 99g/km of CO2 – but this is only possible with the Swift if you're looking to spend a bit more.

If that's the case, then the 1.2-litre Dualjet engine makes a good case for itself. It costs £500 more than the standard engine in the equivalent SZ4, and Suzuki says this version has CO2 emissions of 99g/km, along with the promise of 65.7mpg economy.

The Swift 4x4 is slightly less efficient, but with that Dualjet technology it has CO2 emissions of 111g/km and should manage a claimed 58.9mpg.

Every version of the Suzuki Swift registered from 1 April 2017 onwards costs £140 in annual road tax, while the 1.2-litre Dualjet model makes the best choice for company-car drivers, thanks to its low 16% Benefit-in-Kind (BiK) band.

The Suzuki Swift comes with a three-year/60,000-mile warranty, which is pretty much on par with most rivals. The Kia Rio's seven-year and Hyundai i20's five-year plans both beat it for peace of mind, though.

A three-year, fixed-price servicing plan is available for the Swift, which helps to keep ongoing costs down for owners. Suzuki dealerships are distributed far more thinly than those for Ford or VW, however, so you may find yourself going out of your way to get your car serviced. Servicing isn't expensive, even if you don't go for the fixed-price plan, but a relatively short 9,000-mile interval means your Swift might be in the garage a bit more frequently than some rivals if you use your car a lot.