"The Suzuki Swift Sport is fun to drive, cheap to run and even boasts a bargain price tag"

Although the regular Suzuki Swift is a pretty racy-looking supermini, it’s not the most thrilling of cars to drive. The Suzuki Swift Sport stands as a separate model, building on the Swift’s stylish looks, competitive pricing and impressive list of standard equipment, but boosting driver appeal with more power and a grippier chassis.

It asserts itself with a subtle yet distinctive bodykit, dual exhausts and a rear spoiler. The headlamps are more powerful, too, while inside the driver is treated to sports seats and a steering wheel with a tactile leather rim. 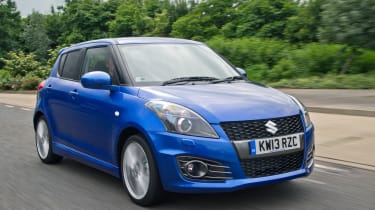 The Swift Sport provides a far simpler recipe than its Ford Fiesta ST and MINI Cooper S competition and you can feel this when you drive it. Rather than complicated technology having the upper hand, only the laws of physics dictate how the Swift Sport responds to your commands. We find this back-to-basics approach extremely appealing, and for precisely this reason we voted it as our Best Hot Hatchback back in 2013.

Providing power to the sure-footed chassis is a 1.6-litre petrol engine, with a six-speed manual gearbox offering quick, positive gearchanges. Performance isn’t breathtaking – 0-62mph takes 8.7 seconds – a far cry from the 6.9 the Fiesta ST needs to do the same – but that’s only part of the story.

Once momentum has been gathered, the Swift Sport’s exceptionally responsive steering and precise, well-judged suspension make carrying speed very easy. Corners are dismissed with a flick of your wrists, making it easy to have fun without reaching dangerous speeds.

As with the regular Swift, there’s not a huge amount of room inside, but the available space has been well used the Sport isn’t an uncomfortable car. It’s also an extremely well equipped one – a fact that emphasises the solid value-for-money that it represents.

Only one trim level is offered, with such luxuries as keyless entry, power-folding door mirrors, metallic paint, and bright HID headlamps. Air-conditioning is also provided as standard, while you can choose your Swift Sport with either three or five doors.

While the MINI offers a much higher degree of customisation than the Suzuki, there are a number of optional interior and exterior upgrades available on the options list, but you could make a convincing argument that going for a Swift Sport in the first place is a more individual choice than going for the MINI anyway.

More than just a stylish and compact sporty hatchback, the Suzuki Sport Swift is a genuine driver’s car. And something of a bargain.