Small boot, but the Suzuki Swift Sport is available as a practical five-door

The Suzuki Swift Sport is unusual in that it can be bought as a sporty three-door model or a more practical five-door. The Ford Fiesta ST and Abarth 500 are both strictly three-door affairs, which limits their appeal.

Inside, the Swift Sport has a good-sized glovebox and large door pockets. There’s also a useful storage space on top of the dashboard, which is ideal for hiding gadgets out of sight.

Passenger space in the rear isn’t as good as what you get in a Volkswagen Polo or Renault Clio. But the most limiting factor to practicality is that there are only two seats in the back, although that does mean the two rear passengers will at least have a reasonable amount of shoulder room.

The steering wheel adjusts both in and out and up and down, and the driver’s seat is height-adjustable, meaning finding a good driving position should be fairly straightforward. 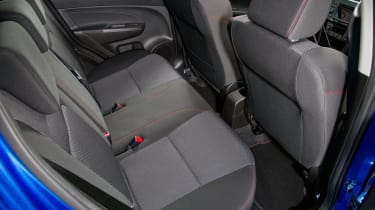 The Swift Sport was previously only available as a three-door, but since the 2013 facelift Suzuki has offered a five-door version, which gives much easier access to the rear seats.

The Suzuki Swift has a tiny 211-litre boot, which is pretty poor when compared to the Vauxhall Corsa (285 litres) or even the smaller Skoda Citigo (251 litres). Put the rear seats down and capacity increases to 512 litres (or 528 litres in the five-door version) but that's still behind the class best.

The rear seats split into two parts, but they don’t fold flat, which makes it harder to load longer, heavier objects. And there’s a large lip to lift luggage over in the first place. The Sport features a tyre-repair kit as standard, but there's no option of a space-saving spare wheel.