It’s a bit of a mixed bag as far as reliability and safety goes. Suzuki has a reputation for building tough cars, but the reality is quite different.

As a maker of rugged off-roaders such as the Suzuki Vitara and Suzuki Jimny, Suzuki can be expected to offer excellent reliability. And in our Driver Power survey 2014 customer satisfaction survey, reliability was its highest score.

Suzuki was placed 12th overall in this category, but that was a rare moment of comfort for the brand, which finished dead last overall out of 33 carmakers. That’s a slide of four places from the previous year’s chart.

This version of the Suzuki Swift Sport wasn’t featured in the survey, but its predecessor was, and it claimed 148th place out of 150 cars. 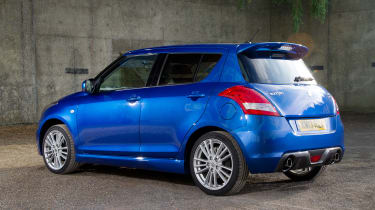 While there may be some questions hanging over the Swift Sport's reliability, there are no such problems where safety is concerned, as the car has a full five-star crash-test rating from Euro NCAP.

Standard safety features include airbags for the driver and front-seat passenger, as well as curtain, side and driver’s knee airbags for added protection in the event of an accident.

Other kit includes tyre-pressure monitoring, anti-lock brakes that can distribute brake force most effectively, braking assistance (which helps the driver to apply the brakes as hard as possible in an emergency) and pedals that are designed to brake in a crash to protect the driver’s feet. There are also ISOFIX child-seat mounts and a front passenger airbag deactivation switch, which allows a rear-facing child seat to be installed in the front seat.