Although the Suzuki Swift Sport is cheap to buy, it holds its value on the used market fairly well. It’ll retain about 47% of its purchase price after three years or 36,000 miles, which is about the same percentage as a Ford Fiesta ST. But because the Suzuki is less expensive to buy in the first place, you’ll lose less cash overall. 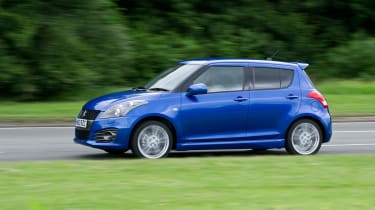 The latest Suzuki Swift Sport is also helped by the addition of a sixth gear, which means the engine doesn’t have to work as hard at motorway speeds, so fuel economy is improved. There’s no difference in the fuel economy or emissions of three and five-door models.

The Swift Sport falls into insurance group 19, which compares well with the Fiesta ST’s group 30 and the Abarth 500’s groups 27-28.

A service payment plan is available, which can cover one, two or three years’ worth of servicing. It can be paid in one lump sum, or by monthly direct debit. Suzuki tailors pricing to the needs of the owner, but a three-year plan for cars covering 8,000 miles a year will cost around £700.