The Suzuki Swift Sport is huge fun to drive, despite the modest power output

In many ways, the Suzuki Swift Sport is like a latter-day original Mini: honest, practical, nippy, but not exceptionally fast.

The brilliance of the Sport is in the way its steering and suspension have been set up. The steering responds immediately to your inputs, making the car a hoot to thread down winding country lanes and through the urban crawl alike.

But it’s the country where the Swift Sport comes into its own. There’s plenty of grip and virtually no body lean in corners, meaning the car feels taut and stable at speed. And that’s essential if the driver is to make best use of the Suzuki Swift Sport’s modest power output. 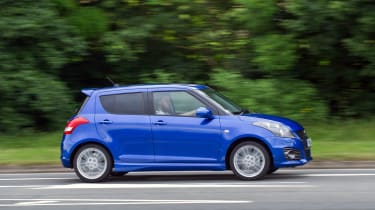 The downside is that the firm suspension can become tiring on a long motorway run, where bumps in the road and road noise are transmitted into the car.

The Suzuki Swift Sport is powered by a 1.6-litre petrol engine that produces 134bhp and gets the car from 0-62mph in 8.7 seconds. That’s not particularly fast for a car that’s so heavily focused on driving fun, yet it’s still faster than a 1.8-litre Mazda MX-5 roadster.

But it doesn’t matter that there’s not much straight-line speed. The Swift feels nippy in town and when you’re out on a winding road, it’s enormous fun – preserving all of that precious performance through a series of bends. Few hot hatchbacks can match the Swift Sport for sheer driving enjoyment.

The Swift Sport has a six-speed manual gearbox with a slick operation, making it easy to change gear quickly and accurately. And that top gear prevents the engine from working too hard and making a tiring droning noise when you’re cruising on the motorway.