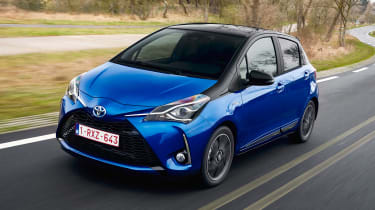 If you’re looking for a car with headline-grabbing fuel-economy figures, then you’re going to like the Yaris Hybrid – its claimed 85.6mpg overall fuel economy beats all its petrol rivals, and most diesels, too. However, some may find those figures tricky to achieve.

A look at Toyota’s claimed fuel economy figures for the Yaris Hybrid will be enough to convince many potential buyers, and for those who make mostly short urban trips, there’s a very decent fuel saving to be made.

Toyota claims urban fuel consumption for the Yaris Hybrid Active and Icon of 91.2mpg, with the bigger 16-inch wheels of higher trims reducing this figure to 85.6mpg. Urban driving is where hybrid cars typically perform at their best – it’s at low speeds and in stop-start traffic that a hybrid’s electric power system is in its element.

However, the Yaris can only travel in all-electric mode for short distances and at low speeds, so drivers who make regular long, fast journeys are less likely to see such impressive figures. Despite Toyota’s claimed extra-urban economy figure of 85.6mpg for models with 15-inch wheels, it seems likely you’ll actually experience figures closer to the regular 1.5-litre petrol model’s already impressive 70mpg claim.

Low CO2 emissions of 75g/km mean that models with 15-inch wheels are are also exempt from the London Congestion Charge and scrape into the 13% Benefit-in-Kind (BiK) bracket. This is a big point in the Yaris Hybrid’s favour for company-car users, who’ll save money by running a Yaris Hybrid compared to the 1.5-litre petrol, which starts in the 20% BiK band.

Every Toyota Yaris Hybrid will cost £130 a year in road tax.

Insurance for the Yaris Hybrid should be relatively inexpensive – every model in the range is in group 8. By comparison, entry-level 1.0-litre petrol models start in group two, while a range-topping 1.5-litre Excel is in group 10.

Every new Toyota sold in the UK has a five-year/100,000-mile warranty – one of the most generous on the market. Among rivals, only the Hyundai i20’s five-year/unlimited-mileage and Kia Rio’s seven-year/100,000 mile warranty can beat it. The nickel-metal-hydride battery pack and electric motor are covered under the main warranty, unlike other hybrid cars where there’s a separate policy for these components.

Because of the more complex nature of its hybrid power system, the Yaris Hybrid is a little more costly to service than regular petrol versions. However, Toyota offers fixed price servicing and can arrange a service plan to help spread the cost of regular maintenance.