The Toyota Yaris might not interest keen drivers, but its reliability and low running costs make it an appealing used buy 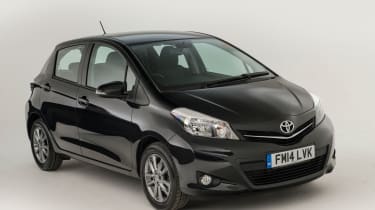 When the first Toyota Yaris arrived in 1999, it was one of the best-built superminis money could buy, with fantastic reliability, which put the Yaris on the map.

Arriving in 2011, the Mk3 Yaris looked to continue the tradition, being easy to drive and with a thoughtfully designed interior with lots of space, better equipment and improved safety. 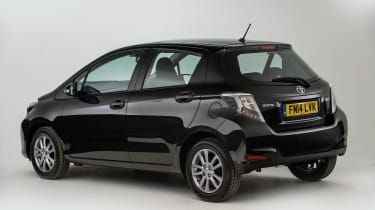 It might not be a package that gets driving enthusiasts hot under the collar, but reliability and practicality make the Yaris a popular used car that doesn’t tend to sit on forecourts for long.

At its launch in autumn 2011, the Yaris was available in three or five-door bodystyles and with either a 1.0 or 1.33-litre petrol engine or a 1.4-litre D-4D diesel. All three came with a manual gearbox as standard, but the top-spec petrol could also be fitted with an optional continuously variable transmission (CVT). Specifications included T2, TR, SR and T-Spirit. 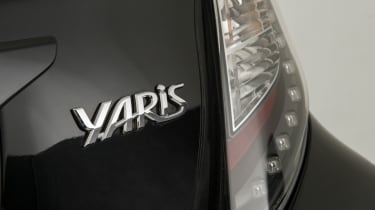 Two special editions arrived a year later, named Edition and Trend and based on T2 and SR respectively. The Trend later became a permanent fixture in showrooms. In 2013, the Yaris was given a mid-life facelift, with a raft of styling tweaks and enhanced materials in the cabin. Notably, in July 2013 a Yaris Hybrid arrived, with a 1.5-litre petrol engine and an electric motor.

Which is the best Toyota Yaris Mk3 version?

It’s worth ignoring the T2 trim level, because it’s basic by modern standards and stepping up to the TR trim brings desirable features like air-conditioning, Bluetooth connectivity and a touchscreen infotainment system.

The SR trim was limited to the 1.33-litre petrol engine, offering sporty looks and some more fun for drivers, thanks to an exterior styling pack, tinted rear windows, lowered suspension and some interior upgrades like part-leather seats. 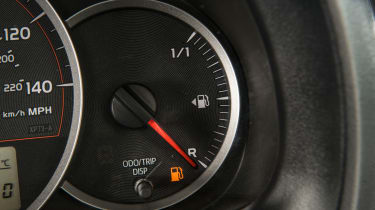 With equipment you’d expect in larger models, the T-Spirit is worth looking out for and includes a glass panoramic sunroof, automatic lights and wipers, dual-zone climate control and a touchscreen infotainment system.

You’ll tend to find cheaper used examples with private sellers, but Toyota dealers can offer added reassurances with approved used models, while the three and five-door versions are barely separated in price. Diesels are very rare, with fewer than 10% of cars sold having this engine, while the Yaris Hybrid proved popular and can be worth seeking out.

The Hybrid offers the lowest running costs, with fuel consumption in the region of 80mpg, but you may need to adjust your driving technique to achieve this and the Hybrid is also more expensive to buy in the first place.

Choose the diesel and economy is claimed to be 72mpg, with an annual tax bill of just £20 thanks to CO2 emissions of 104g/km. Among the popular petrol engines, the 1.0-litre is predictably the greenest, with 58mpg and a £30 tax bill.

Expect up to 52mpg from the 1.33-litre, but note that models fitted with larger wheels can increase CO2 and push the Yaris into the £110 tax bracket. Most versions cost just £30 in road tax, however, and unlike many models, fitting an automatic gearbox improves economy to 56mpg.

The Yaris is known for being cheap to insure, with the 1.0-litre as low as group 3, going up to group 12 for a range-topping diesel.

Servicing is required annually or after 10,000 miles, and it’s worth checking which service is required next on a used car. Intermediate services cost around £135, while a major service is between £195 and £255. You can also expect to pay around £20 more for services if you choose a Yaris Hybrid.

No cambelt changes are required for the Mk3 Yaris, but you should plan to have the brake fluid changed every couple of years (costing around £39), while you should expect to pay £65 to have engine coolant replaced every decade or 100,000 miles.

While the Yaris is fundamentally very reliable, there are a few niggling issues to look out for. For example, check for corrosion around the rear number plate, an issue that Toyota is aware of.

It’s also possible for petrol engines to develop a misfire rather mysteriously, although this does usually correct itself when the engine is stopped and restarted. 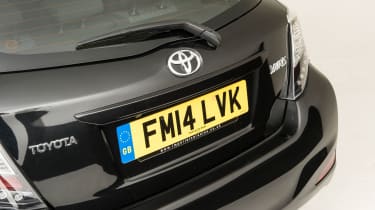 Yaris Hybrid owners have reported that the official fuel consumption figure is unrealistic in ‘real-world’ driving, with 45-50mpg more typical.

Some owners also fit a handmade cover on top of the dashboard, because its shiny plastic can throw annoying reflections on the windscreen when driving at night.

Several recalls have been issued, so it’s important to check if these could affect any potential purchase and that all necessary work has been carried out. The first recall was in April 2013 and addressed a potential brake-fluid leak, while a second in August 2013 was for a potential power-steering failure on models built before March 2012.

A further recall in 2014 affected just 22 hybrid models, again for a possible brake-fluid leak. Most recently, a recall at the start of 2015 affected some models built before September 2013, to check for a potential oil leak that could possibly lead to a fire.

The Yaris is in one of the most competitive car classes there is, with almost every manufacturer offering a strong contender. Great all-rounders like the Ford Fiesta are plentiful, drive well and can be lavishly equipped. 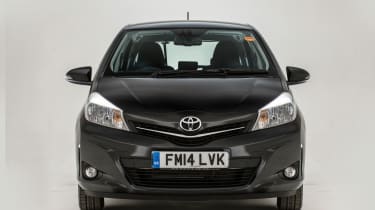 The Vauxhall Corsa is popular, but not as much fun to drive as the Fiesta. Alternatives like the Hyundai i20 and Kia Rio are both reliable and came with long warranties, while the Mazda2 and Volkswagen Polo are stylish and desirable choices.

Buyers looking at a used Toyota Yaris are likely to want hassle-free ownership and that’s exactly what the Yaris offers, along with a network of dealerships that generally scores highly for customer satisfaction.

Along with reliability, low running costs are the other major plus point of the Yaris, making it a popular used buy. It’s not particularly exciting to drive, but this probably isn’t too much of a concern for those looking for one.