The Volkswagen Touareg feels solidly built, but there are a few question marks over VW reliability

VW hasn’t done brilliantly in the reliability stakes lately, although the signs are good for the current-generation Volkswagen Touareg. It’s also very safe – there’s a lot of kit to keep you protected and almost all of it comes as standard.

The Volkswagen Touareg didn’t feature in our Driver Power 2017 owner satisfaction survey, but Volkswagen finished a disappointing 14th out of 27 manufacturers. Having said that, the Touareg uses well proven engines and parts from across the VW range and should be solidly constructed. It's also a proper, tough off-roader. 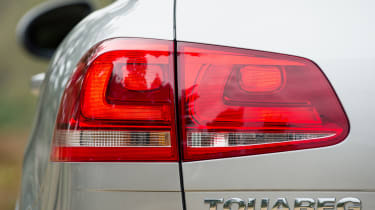 The current Touareg has never been crash-tested by Euro NCAP, but the old car was awarded five stars in 2004. The vast majority of other Volkswagen cars also perform well.

It has all the safety features you’d expect of a car costing this much, including six airbags, electronic stability control and a driver alert system that warns you when you need to take a rest. An anti-theft alarm and immobiliser are also standard equipment.

You can specify an airbag pack (around £400) to add a driver’s knee airbag, rear side airbags and rear seat belt tensioners which help hold rear occupants in place in an accident. Other options available on all models are Area View to help with low-speed maneuvering (around £950) and Lane Assist & Side Scan (about £900). The latter assists with motorway driving by warning you if there’s a vehicle in your blind spot while also alerting you if you drift towards another lane without realising.