The Volkswagen Touareg feels much smaller from behind the wheel than its dimensions suggest. A lot of that is down to the car’s nicely shaped steering wheel and raised driving position, which gives you excellent visibility. This, along with the standard parking sensors and reversing camera, means that the job of parking a car that’s nearly five metres long shouldn’t intimidate you.

Space inside the Volkswagen Touareg is generally pretty good, with plenty of room up front for tall occupants. Sitting in the back might not be so enjoyable if you end up in the middle seat. Unlike in the Land Rover Discovery, it’s raised up, plus there isn't a lot of space for your feet thanks to the Touareg's bulky transmission tunnel. 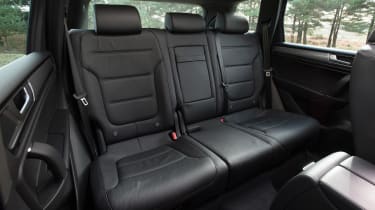 The interior boasts lots of useful storage areas, including a large glovebox, a space in the centre of the dashboard, room under the front centre armrest and spacious door bins that can carry a large bottle of water. The centre console boasts two cup-holders and the rear centre armrest offers another pair. Rivals have edged ahead in this area, though.

The back seat has some useful features, such as the ability to slide forwards and backwards, as well as recline. This allows you to strike a balance between legroom in the back and storage space in the boot. 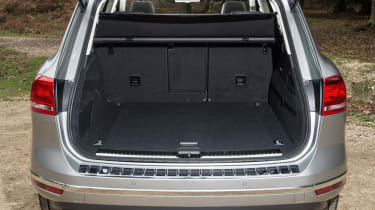 The seats also drop down easily when you press a button in the boot, increasing luggage space from 580 to 1,642 litres. The Touareg lags behind its class rivals, however. The Porsche Cayenne offers 670 litres behind the rear seats, while the BMW X5 offers 650 litres with them raised and 1,870 when they’re dropped down.

Although the Touareg’s rear seats don’t fold completely flat into the boot floor, there’s no high lip, so even heavy items shouldn’t be too difficult to get in. It’s a similar story with the Cayenne.

The Touareg makes a good choice for towing a trailer or caravan, able to shift weights of up to 3,500kg. This is the same as what the Porsche Cayenne and the more powerful version of the BMW X5 can manage.