Since VW dropped the hybrid and larger V8 diesel engines from the Volkswagen Touareg line-up, its fuel economy and CO2 emissions figures are pretty much identical no matter which model you go for. The Touareg's less prestigious badge means it’ll lose more value on the used market than premium rivals such as the Porsche Cayenne and Land Rover Discovery – although it's cheaper to buy in the first place than both of those models. Bear this in mind before you add too many options. 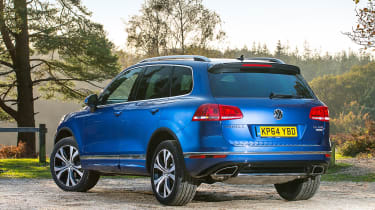 The basic 201bhp 3.0-litre TDI diesel will return 42.8mpg and emits 176g/km of CO2. The more powerful 258bhp 3.0-litre engine offers a decent improvement in mid-range shove and overall performance, with only a small change in the claimed fuel economy, to 41.5mpg and 180g/km of CO2.

Official figures of 42.2mpg and 41.5mpg are quoted for the 201 and 256bhp engines respectively. There are more economical SUVs available, with 2.0-litre and two-wheel-drive versions of the BMW X5 returning up to 53mpg, which is the same official figure as the Lexus RX 450h hybrid.

Because all Touaregs cost over £40,000, road tax costs £450 annually (£140 per year plus a £310 surcharge for the first five years of ownership after the initial CO2-weighted payment that’s usually rolled into the on-the-road price). If you're a company-car driver, the entry-level engine is slightly more affordable, with a 35% Benefit-in-Kind (BiK) rating instead of 36%. The BMW X5 is available with a 27% BiK, while the RX 450h is even better at 21%.

The less powerful engine is in insurance group 40, while the more powerful one is in group 43 or 44 depending on trim level, which is roughly on a par with equivalent rivals. The Land Rover Discovery is rated from group 33 to 43, while the BMW X5 starts at group 38 for its 2.0-litre engine and climbs to around group 47 for high-performance versions.

Volkswagen offers its standard three-year/60,000-mile (whichever comes first) warranty on the Touareg. This is slightly less than what you get with a BMW or Land Rover – neither of those brands imposes a mileage limit on its three-year warranty cover.

As a big four-wheel-drive car, the Touareg is never going to be cheap to maintain, but Volkswagen does offer fixed-price service plans, as well as the option to pay for your car’s upkeep with regular monthly payments. The Touareg’s service intervals (on Volkswagen’s ‘Fixed Service’ plan) are one year/10,000 miles for an oil change service and two years/20,000 miles for the first ‘Inspection’ service (then every year or 20,000 miles). Volkswagen offers a ‘Flexible Service’ plan that allows greater mileages between services if your driving habits meet a certain criteria.