"The Volkswagen Touareg is a decent road car, but under the luxurious interior lurks the mechanicals of a serious off-road machine"

The Volkswagen Touareg is the largest SUV in the German firm’s range. It goes up against a list of talented rivals that includes the BMW X5, Lexus RX and Mercedes GLE, as well as the Land Rover Discovery and Range Rover Velar. It’s the biggest and most luxurious Volkswagen but a model that’s reaching the end of its production life.

If you’ve been keeping up to date with new additions to the rest of the Volkswagen range, you’ll know that the company is introducing sharper designs across the board; the Volkswagen Tiguan, all-new T-Roc SUV and Polo supermini can’t help but make the Touareg look dated in that regard. The current Touareg has been available since 2010, albeit with a facelift a couple of years ago to keep things fresh, and an all-new model is due to arrive in 2018.

The Touareg remains an accomplished all-round luxury SUV despite its age. It is large, solidly built and majors on practicality, even if its more modern rivals offer more for most buyers in almost every department. The Touareg’s styling lacks the flair of the Range Rover Velar, but doesn’t lag too far behind its more traditional German rivals.

Inside, the Touareg feels high-quality but old-fashioned. High-grade plastics, metal trim and swathes of leather are all as expected for a car of this type. There’s a large central touchscreen for the car’s infotainment system, but it’s not as sophisticated as those found in most rivas. Volkswagen’s Active Info Display – a screen which replaces the traditional dials behind the steering wheel – is notable by its absence. Needless to say, if you want the latest, most modern luxury SUV available, you’ll have to wait for the Touareg’s forthcoming replacement. 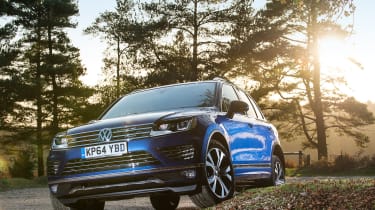 Interior space is adequate, with lots of shoulder room thanks to its considerable width and plenty of legroom. The Touareg is strictly a five-seater, so if you’d like a seven-seat option, you’ll need to look at cars like the Land Rover Discovery.

There’s only one engine – a 3.0-litre diesel V6 with either 201 or 258bhp – but it’s well suited to the Touareg, providing smooth and brisk performance. Both are fitted with an eight-speed automatic gearbox and return just over 40mpg, while road tax costs £450 annually.

Available trim levels are called SE, R-Line and R-Line Plus, with all three offering copious amounts of kit thanks to the Touareg’s flagship status. The SE model has conservative looks, while R-Line versions are fitted with 20-inch alloy wheels, body styling accessories and different seats for a sportier feel. The R-Line Plus does what it says, making the wheels an inch larger and enhancing the leather and interior trim.