Cars don’t get much more practical than the Skoda Kodiaq

Some of the trims available with Skoda Kodiaq are expensive, but there’s one thing all cars come with as standard: space, and lots of it. Front and rear-seat passengers get masses of room, while the Kodiaq has a boot that’s so large it could almost be measured in hectares. 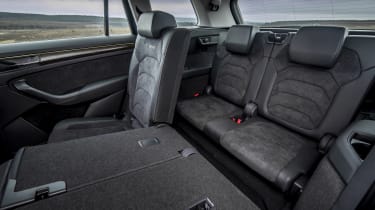 Five adults will be more than comfortable on a long journey with a boot packed full of luggage and there’s a roomy feel up front. The driver will find a comfortable position easy to find, while both front-seat occupants have loads of shoulder room.

Skoda tends to justify its ‘simply clever’ tagline when it comes to its cars’ interiors and the Kodiaq is no exception. Plastic flaps automatically deploy along the edges of the doors when opening them to help you avoid car-park and garage-wall dings, while the cup-holders have been designed to grip bottles enough to allow for one-handed cap removal.

SE cars and above have handy luggage nets on the side of the transmission tunnel next to front-seat occupants’ legs and the Kodiaq has not one, but two decently sized gloveboxes. Small details, maybe but thoughtful ones nonetheless.

The Kodiaq is available with five or seven seats, and on longer journeys, adults will find the third row of seats tight, as headroom back there is limited, but legroom is good, particularly if middle-seat occupants slide their seats forward. 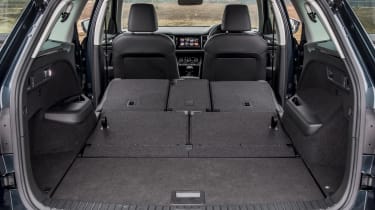 Unless you’re in the piano-removal business, the Kodiaq’s boot should suffice. Total storage is 720 litres in the five-seater model, rising to 2,005 litres if you fold the rear seats. Compare those numbers to the X-Trail (565/1,996 litres) the Kia Sorento (660/1,732 litres) and the substantially bigger BMW X5 (650/1,870 litres) and the Kodiaq is a clear winner in terms of luggage space and easy to load thanks to an absence of any lip to lift bulky items over.

The seven-seater Kodiaq has a slightly smaller boot (630 litres with five seats in place), but it’s still huge. It remains a useable size in theory at 270 litres when all seven seats are up, which is just a few litres shy of the boot space found in a Ford Fiesta. But be aware that in the Fiesta those litres lie horizontally; in the Kodiaq they’re balanced vertically, as your luggage will be.

A real Kodiaq strength: choose a diesel engine and four-wheel drive together with the DSG gearbox and the Kodiaq has a towing capacity of 2,500kg. This is roughly 250kg more than the most capable X-Trail. The Kodiaq’s Trailer Assist feature can even steer the car for you when reversing slowly. It's worth noting, however, that the 148bhp diesel with four-wheel drive and seven seats isn't currently homologated for towing, so check with your dealership before going ahead.