The Skoda Kodiaq feels supremely competent, solid and safe on the road 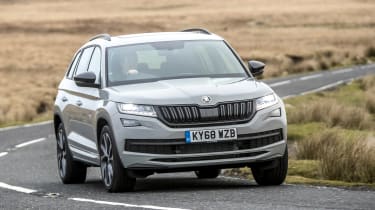 Considering its size, the Skoda Kodiaq is a very enjoyable car to drive. Its steering is accurate and makes placing the car on the road easy and body lean is well controlled when cornering, despite the Kodiaq’s height. We found ourselves having more fun than we expected on our test drives, yet in most versions this didn’t come at the expense of comfort, as the Kodiaq’s suspension copes well with bumps. It’s not quite as smooth-riding as the Peugeot 5008, but the Kodiaq is sharper as a result and its suspension also works better than the Nissan X-Trail’s.

We recommend avoiding the Sportline version, though, because it comes on huge 20-inch alloy wheels with low-profile tyres. These don’t really make the Kodiaq any better to drive than the SE L, but they do make the ride uncomfortably firm. Further tweaks were added to the Skoda Kodiaq vRS to make it perform even better, but it’s no longer on sale.

An optional ‘Driving Mode Select’ feature allows you to switch between Normal, Eco and Sport modes, adjusting the acceleration, gearbox (assuming you choose an automatic) and steering characteristics as you do so. However, we don’t feel that the difference it makes is convincing enough to justify the added cost. As it is, the Land Rover Discovery Sport is more entertaining in corners, but it’s a far more expensive car and we wouldn’t want to risk compromising the Kodiaq’s ride – even on big 19-inch wheels, the Skoda copes admirably with bumpy roads.

We were also impressed by how quiet the Kodiaq is. Wind and road noise are extremely well insulated against, while the diesel engine was smooth and hushed, even when being pushed. Meanwhile, although four-wheel drive is available, we don’t think it’s necessary unless you regularly encounter tricky road conditions or tow heavy loads. It provides better traction on loose or slippery surfaces, as well as adding a modicum of all-terrain ability, but the Kodiaq isn’t intended to follow Land Rovers into the jungle. 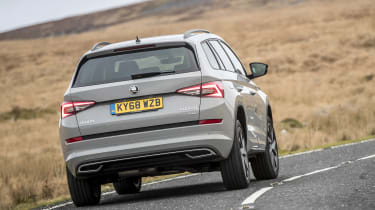 A 1.5-litre petrol engine kicks off the range with 148bhp, getting the Kodiaq from 0-62mph in just under 10 seconds with a manual or automatic gearbox. It's a respectable figure, but the engine feels like it needs to be worked fairly hard in the big Kodiaq, so this engine is best suited to town driving. The 187bhp 2.0-litre petrol engine is the more powerful petrol choice, although this is likely to be a rare choice due to its high price and fuel consumption. Available from SE L trim, it gets the Kodiaq from 0-62mph in 7.6 seconds.

The 187bhp 2.0-litre petrol engine has four-wheel-drive and a seven-speed DSG automatic – there’s no front-wheel-drive or manual option here.

The Volkswagen Group’s proven 2.0-litre diesels come into play here and they’re punchy, efficient performers. The 148bhp version has just the right amount of power, with a 0-62mph time of 9.7 seconds that should satisfy most drivers and offers a punchy feel on hilly roads.

There’s also a 197bhp version that goes from 0-62mph in under eight seconds, should you want a little more performance.

All diesels now come with a seven-speed DSG automatic by default, while the 187bhp petrol and 197bhp diesel also get four-wheel drive as standard. This is a bit of a shame, as the Sportline version is a bit sluggish with this gearbox, which is too reluctant to kick down when accelerating. When it was available, the Skoda Kodiaq vRS was fitted with a 2.0-litre BiTDI engine with two turbos. It had 237bhp, a seven-second 0-62mph time and a top speed of 137mph but its high price and running costs meant it was eventually removed from sale.